By George Kanzler
November 18, 2008
Sign in to view read count 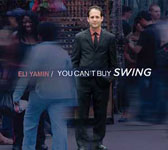 Pianist Eli Yamin is a communicator who believes jazz can foster a sense of community. His work is expansive and extroverted, populist in the best sense. As a teacher—he's now part of Jazz at Lincoln Center's education program—he's created jazz dramas and the dramatic impulse is a strong component of his music. So is swing. This album's title comes from a saying by a drummer who worked often with Yamin, the late Walter Perkins: "You can't buy swing, baby sweets. You can take the biggest name musicians and pay 'em a whole bunch of money and it's not necessarily going to swing." The rhythm section here—bassist Ari Roland and drummer Alvin Atkinson—definitely swings, benefiting from having recently made a State Department-sponsored foreign tour.

The opening track, "I Want To Be A Teacher," as well as "Well, You Better Not," derive from jazz dramas Yamin wrote during his tenure at Louis Armstrong Middle School. Both are contrafacts of Thelonious Monk tunes, "Let's Cool One" and "Well, You Needn't" respectively. They display Yamin's command of Monk devices and flourishes, delivered with exuberance. Chris Byars, who completes the quartet on all but two tracks, finds the Monk groove on soprano and alto saxophones. Alto saxophonist Lakecia Benjamin, who Yamin met when she was a student at LaGuardia High School, digs into the backbeat shuffle of the title tune and bright swirls of "Katiana's New Start."

In his impressive command of jazz piano traditions—referencing Erroll Garner, Ahmad Jamal or Abdullah Ibrahim as easily as Monk—Yamin is reminiscent of the late Jaki Byard, another expansive omnivore of jazz. On "Rwandian Child," a trio track with sax backgrounds at the heart of the album, Yamin builds a dramatically fulfilling performance, personalizing a full spectrum of jazz piano traditions.

I Want To Be A Teacher; You Can