Alan Broadbent: You And The Night And The Music

BY RICH FRIEDMAN
March 1, 2004
Sign in to view read count 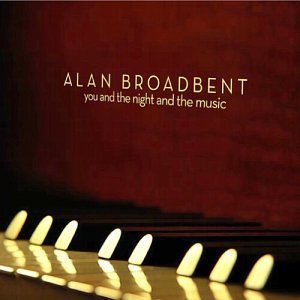 Alan Broadbent joins an esteemed group of jazz pianists—Bill Charlap, Brad Mehldau, Bill Cunliffe, and Don Friedman, to name just a few—who critics, at one time or another, have anointed the next Bill Evans. It’s a curse and a compliment, much like an athlete making the cover of Sports Illustrated and having to live up to all the hype. Does the world really need a Bill Evans clone?

Yet it’s easy to draw similarities between Alan Broadbent’s style of play on his trio albums and Bill Evans' own personal touch. Each has a unique rhythmic sense that makes everything he plays distinctive. On his latest mid-tempo trio album, You and the Night and the Music , Broadbent embraces seven standards with exquisite lyricism; his right hand never loses track of the melody while his left hand delivers finely articulated arpeggios. Rounding out the trio are Joe LaBarbera on drums (who was part of Bill Evans' trio) and Brain Bromberg on bass.

Alan Broadbent is a highly sought-after arranger, writer and musical director. His resume includes a long list of impressive accomplishments: two Grammy awards; songs written for Natalie Cole and for Charlie Haden’s Quartet West; a role as arranger and pianist in Woody Herman’s band, and a current position as Diana Krall’s musical director. But you get the feeling that Broadbent performs in piano trios for sheer fun. The trio is an intimate ensemble that offers him an outlet for improvisational flexibility and thought-provoking expression.

If there is a downside to this disk it is that Alan Broadbent is such a skillful, polished performer that his music lulls you to stop listening closely. Sometimes you think you’ve heard it all before... the ghost of Evans? Everything sounds so great it’s easy to tune out some of the stylistic surprises that Alan Broadbent effortlessly accomplishes.

If you like You and the Night and the Music I strongly urge you to listen to Broadbent's Personal Standards , a 1997 Concord release with Putter Smith on bass, Joe LaBarbera on drums. On that disc Broadbent plays nine original tunes, songs he has been playing on and off for a long time. It's a delightful companion.

You and the Night and the Music; I Wish I Knew; With the Wind and the Rain in her Hair; Baubles, Bangles, and Beads; Ceora; What