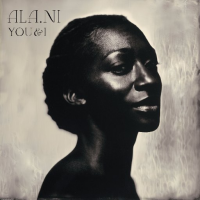 Romantic poetry set to music can never go out of style, for it describes fundamental human emotions in a creative fashion. With the conceptual collection You & I, vocalist and composer ALA.NI presents a beautiful blend of chanson inspired lyrical rhythm, laced with vintage American jazz. Able to capture the essence of love in song, she conveys the moods of joy and sorrow, and the grey area in between.

Though currently based out of Paris, ALA.NI was born and raised in London, of Grenadian parents. She attended stage, dance, and music schools all of her life, becoming quite proficient in theater productions. Her obvious outstanding vocal talent led to her singing back-up for notable, and diverse, performers as Mary J. Blige, and Andrea Bocelli. Her vocal quality and style could be defined as a film noir interpretation of Billie Holiday meets Edith Piaf, both imaginative, and emotive vocalists; but any comparison would be superficial, for ALA.NI is an eccentric and eclectic singer, with a unique story to tell.

The songs intentionally align themselves with a love affair in all of its manifestations and seasons. "Cherry Blossoms," is an optimistic invitation to wander along the river, in search of a possibility. The finger-snapping swing on "Ol' Fashioned Kiss," highlights the subterranean jazz influence in ALA.NI's writing, with an added organic groove element. An underlying waltz cadence envelopes "Come To Me," the vocals swirling around an imaginary ballroom, in splendorous anticipation. Pianist James Welland sets the sincere tone of "Suddenly," where the lover stumbles upon the harsh reality of an uncertain outcome. A forlorn bohemian current propels "One Heart," emphasized by sparse guitar accompaniment from Rob Updegraff, while the vocal hangs in expectant suspension. "Roses And Wine," reveals the desperation of a complicated love triangle, a muted flugelhorn, by Graeme Flowers, plays the requiem, as the roses wilt.

Midway through the record, "Darkness At Noon," has ALA.NI at her best, dredging where regret transforms into misery, performing a melancholic dirge. The grief gradually subsides, as "I'll Remember," allows the memory process to follow its course. She returns "To The River," in an upbeat frame of mind, though emotionally beat up, but better for it, the metaphorically flowing water washing troubles away. In a clever example of whatever does not kill you, will make you stronger, "Circle," draws from life's cyclical momentum, with the advice to hold on tight, you'll make it.

ALA.NI composed all of these songs in her head, then acapella, adding the music as an afterthought. Her life-long foundation in dramatic performance is evident in her absolute control of vocal tones and nuances, and in her innate ability to inject imagery and emotion into her songs. Wringing inspiration from personal experiences, with the proper amount of artistic embellishment to make them palpable and relevant to her audience, her music is as timeless as romance itself.