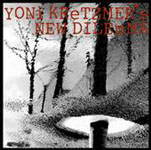 Unlike many young jazz players in Israel, tenor saxophonist Kretzmer chose to broaden his musical education in France, instead of the United States. This appears to have exposed him to a much more varied scene, and a more open and flexible definition of jazz genres.

His musical world is rooted in the fusion-meets-progressive rock of his former quartet, The Rats, along with the Aylerian free jazz he explores with Sun Ra Arkestra alumni alto saxophonist Avshalom Ben Shlomo, reed player Albert Beger and the adventurous attempt to bridge classically-trained musicians and jazz improvisers in the Tel Aviv Art Ensemble.

Kretzmer's debut as a leader, New Dilemna focuses on combining free improvised jazz and modern chamber music. As such, he's following the works of Dave Douglas' String Quintet of the 1990s (including 1993's Parallel World, 1996's Five and 1998's Convergence, all on Soul Note); and Kretzmer's hero Ellery Eskelin's flirt with strings on Vanishing Point (Hatology, 2001)

But Kretzmer's project here is different, mainly by the choice of strings players. Violist Daniel Tanchelson and cellist Neta Cohen Shani have no background in improvisation, at least in its common jazz sense. The group is rounded out by drummer Daniel Feingold, a fellow member of The Rats, and up-and-coming double-bassist Ehud Etun.

The seven pieces offer different strategies for arranging between the improvised and the composed. In some of the compositions it's difficult to tell what is composed and what is improvised, and the spontaneous interplay overcomes the structure of the pieces.

The first piece, "Harder," contrasts Kretzmer, Etun and Feingold's emotional and energetic playing against the slow, reserved performance of the strings, when both are not united by the theme. Tanchelson and Shani suggest a rhythmic theme at the beginning of "2-700," but Kretzmer, Etun and Feingold soon pick this theme and push it through tough and muscular interplay that later slows down and softens, as the strings return. "Drunken Morning" is led by the strings' dense soundscape, with minimal contributions by Kretzmer and Feingold. All five players are in free-form mode for "She Knows," as this pieces moves from its chaotic opening to a swinging passage and expressive free blowing by Kretzmer, with a somber string background.

On "Mess In A," Kretzmer, Etun and Feingold work within a tight rhythmic framework anchored in the composed themes performed by Tanchelson and Shani. The slow-tempo interplay on the short "Low As Possible" finds a peaceful common ground for all the players. The last piece, "Kids Song," begins as an innocent and playful composition quoting from The Beatles' "Golden Slumbers," but steadily builds into a free blow-out.

This adventurous and quite satisfying release shows Kretzmer is a musician with a vision. It comes with a beautiful cover that pays tribute to the innovative designs of Steve Byram for Tim Berne's Screwgun Records.