Spyro Gyra: Wrapped in a Dream

By Woodrow Wilkins
March 5, 2006
Sign in to view read count 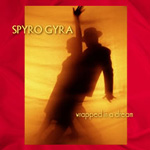 When people say "one-hit wonder, the last thing that comes to mind is an act that's been around for three decades, recorded some 25 albums (not counting compilations), and has legions of fans worldwide. Yet, that's what Spyro Gyra is—the wonder being that one of contemporary jazz's most popular acts has only one hit song: "Morning Dance. Since then, the group has delivered such diverse albums as Alternating Currents (1985), Three Wishes (1992) and Original Cinema (2003), as well as breathtaking songs like "Incognito, "Breakout and "Wiggle Room. Now comes Wrapped in a Dream, which may be their best ever.

Spyro Gyra's regular lineup consists of Jay Beckenstein (saxophones), Tom Schuman (keyboards), Julio Fernandez (guitars), and Scott Ambush (bass); drummer Ludwig Afonso joined the group about two years ago. Strangely, Afonso only appears on one track on each of the group's two latest albums. Longtime drummer Joel Rosenblatt recorded most of 2004's The Deep End, with Billy Kilson filling in on three tracks. Josh Dion gets most of the work on Wrapped in a Dream. Other guest musicians include percussionist Cyro Baptista and trombonist Eric Oliver.

Wrapped in a Dream opens with the high-energy "Spyro Time, a fun-filled romp penned by Fernandez. Chuck Loeb, who wrote or co-wrote songs for previous Spyro Gyra albums, contributes "Midnight Thunder and "Tuesday. Ambush serves up the funk-driven "The Voodooyoudoo, which features attention-getting solos by Nathan Eklund and Beckenstein, punctuated at the 3:00 mark when Eklund's trumpet begins a grind that segues into Beckenstein's signature growl.

"Impressions of Madrid presents some firsts for a Spyro Gyra recording: Beckenstein is credited with vocals and plays the flute (an uncredited flute is also heard on "Tuesday ), and the song segues into "Impressions of Toledo, a transition reminiscent of ELO and Earth, Wind & Fire, both of whom mastered the tactic during their heyday. Fernandez takes point on "Toledo, complemented by Schuman's piano solo. Don't let the soprano sax and easygoing attitude of the title song fool you.

"Wrapped in a Dream is a swinging jazz tune, highlighted by Beckenstein's "play what you feel lead and the rhythm set by Schuman, Ambush and Dion. The group injects a bit of Mississippi-style blues with Fernandez's "After the Storm. Schuman kicks it into high gear on the organ, Ambush jams on the upright bass, and Beckenstein's familiar grind make this one of the better songs on an already exceptional album.

Former Spyro Gyra member Dave Samuels adds vibes on "Lil Mono and marimba on "Impressions of Madrid and "Woogitybop, a refreshing change from recent guest appearances where he only played vibes. In the early years, Samuels' marimba helped define the Spyro Gyra sound. However, Wrapped in a Dream should put to rest any notion that this group is easy to define. This album does a little of everything—and well. One should expect no less from one of jazz's most durable and versatile acts.