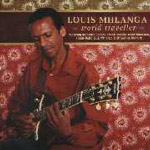 Louis Mhlanga has established himself as one of Southern Africa's most influential and unique guitarists. Originally from Zimbabwe, he now records for South Africa's Sheer Sound label. While his music, as the title of this album suggests, draws its inspiration from all over the globe, his guitar playing seems to draw its greatest influences from the melodic contours and rhythmic plays heard in the mbira music of Zimbabwe.

This 2005 collection is mostly a retrospective album of Mhlanga's earlier releases for Sheer Sound. However, for people who are familiar with the guitarist's music, World Traveller also contains three new recordings that revisit some of his earlier, mostly pre-Sheer Sound, material.

The selections focus on the artist's more upbeat, danceable side, with tracks like "Rhumba All the Way (featuring Orchestra Baobab), "Mari Hukuna and "Zuva. We only get a taste of his more introspective work—two sublime duet albums with upright bassist Eric van der Westen—on one track, "Kamba Kemaziso. However, the general absence of these albums from this compilation makes for a more thematically unified release, and the curious can always pick up the duet albums later.

Ultimately, World Traveller gives a clear and useful introduction to listeners not familiar with Mhlanga's music, and provides some extremely worthwhile new material for those who have already heard his work. For further listening, check out his duet album with Vusi Mahlasela, Live at the Bass line, and the two above-mentioned albums with Eric van der Westen, Song for Nomsa and Keeping the Dream.

Note: This recording is available from One World on the web.