By Jakob Baekgaard
September 20, 2017
Sign in to view read count 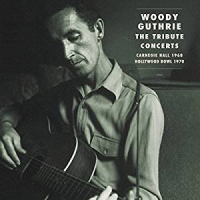 Tribute concerts are often a mixed bag, especially if the idea is to bring a group of stars together to pay homage to an influential musical figure. The recent tribute to the wonderful singer, Tony Bennett, Tony Bennett Celebrates 90 (Columbia, 2016) is a sad case in point. There is no shortage of stars on that particular album, but the aesthetic understanding of Bennett's music is so limited that it reduces rather than expands the scope of his musical legacy. A good tribute does the opposite of this. It shows the many aspects of an artist and paints a nuanced portrait that goes beyond the easy clichés. It shows the connection between the artist's own story and the musical narrative that he or she has helped to build.

The reason why the tribute concerts to the famous folksinger and activist, Woody Guthrie, recorded in 1968 and 1970, were so successful was that the musicians involved had a genuine connection to Guthrie's musical legacy. They carried on the torch in different ways. Arlo Guthrie, Woody's son, Joan Baez, Pete Seeger, Country Joe McDonald, Odetta, Jack Eliot, Richie Havens, Judy Collins, Tom Paxton and the brightest star of them all, Bob Dylan, were all folksingers in their own way. Like Guthrie, they built their songs on the rich tradition of American folk music and Guthrie showed them how the manifold sounds of the American soil could be transformed into a personal voice. Songs like "Oklahoma Hills," "Vigilante Man" and "1913 Massacre" still resonate today with strong storytelling and "Pastures of Plenty" and "This Land Is Your Land" have become national anthems. Listeners searching for a song that describes the harsh condition of migrants need not look any further than "Plane Wreck at Los Gatos (Deportee)," a song that feels like it was written for today.

Guthrie was a political singer, but he was not a moralist. He did not stand high on a hill preaching to others from a safe position, but he spoke clearly with humanity. His was a voice that had known hardship, but refused to give up. Instead, there was optimistic defiance in his songs. A lengthy quote from him sums it up:

"I hate a song that makes you think that you're not any good. I hate a song that makes you think you're just born to lose. Bound to lose. No good to nobody. No good for nothing. Because you are either too old, too young or too fat or too thin or too ugly or too this or too that. Songs that run you down or songs that poke fun at you on account of your bad luck or your hard travelling. I am out to fight these songs to my very last breath of air and my last drop blood. I am out to sing songs that will prove to you that this is your world and that if it has hit you pretty hard and knocked you down for a dozen loops, no matter how hard it's run you down, and rolled over you, no matter what color, what size you are, how you are built; I am to sing the songs that will make you take pride in yourself..."

This exact quote was a part of the manuscript that accompanied both of the concerts in Carnegie Hall in 1968 and in the Hollywood Bowl in 1970. The narration with Woody's words, read out loud by Will Geer, Robert Ryan and Peter Fonda, was an integrated part of the concerts and brought his charismatic personality to life. Arlo Guthrie has said that the script was not able to catch Guthrie's spontaneity. While this is true, the power of Woody's words is still there, along with his music interpreted in all its glorious nuances from the rough diamond voice and battered, percussive guitar of Richie Havens to the ethereal siren song of Judy Collins on "Plane Wreck at Los Gatos (Deportee)." Dylan is the star, but he is just one out of many. The real star of the concert is Woody's songs and they shine in this context.

Now, the premier reissue label, Bear Family, has gathered both of the concerts and several unreleased cuts in a lavish box with extensive documentation. Besides three compact discs, the box includes two hardbound books: a reprint of the original concert book that accompanied the release, with transcription of songs and the concert manuscript with the narrations. The other book contains essays, eye witness accounts, press clippings, an overwhelming discography and a bounty of photos. It is an impressive artifact, but most of all, it is a testament to Guthrie's enduring legacy. Here is a set that makes you want to listen to Woody Guthrie all over again, and perhaps pick up a guitar and sing new songs of protest.