BY DOUG COLLETTE
September 4, 2017
Sign in to view read count 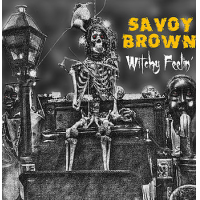 Even though the impact of the music isn't any less potent, the artist designation for Witchy Feelin' is notably different than that of the prior album by Kim Simmonds and Savoy Brown. In an act of combined humility and self-confidence on the part of the leader, the billing goes wholly to the band and that spirit of generosity bespeaks their unity and devotion to each other as an ensemble, not to mention a loyalty to the blues genre that dates back to the Simmonds' founding of the group during the Sixties in Great Britain.

In contrast to many of the earlier lineups of Savoy Brown, Kim is the chief songwriter (exclusively, in fact, on this record), sole vocalist as well as lead guitarist. But rather than shoulder more than he can rightfully handle, the assignment of these multiple duties gives birth to an overall approach that precludes any frills. As a result, the hard-rocking riff that opens the album, "Why Did You Hoodoo Me." sets the tone for the ten cuts to come. "Livin' on the Bayou" is more temperate, but only slightly so, and to positive dynamic effect as well, particularly as it's sandwiched between the aforementioned first track and "I Can't Stop the Blues;" if the self-referential implication of that title sounds precious, the edge in the composer's guitar slices away that potential drawback.

Likewise, the sound of Kim Simmonds' voice may draw comparisons to that of Mark Knopfler, but the Savoy Brown frontman's phrasing has none of the affectations that so often arise in the singing of Dire Straits' leader. As with his guitar playing on this title song (and throughout this self-produced album), he hits the notes that are absolutely necessary, embellishing them only to reinforce the accuracy of his attack.

Bassist Pat DeSalvo and drummer Garnet Grimm deserve similar praise, individually and as a team. Like so many outstanding rhythm sections, the pair are more felt than heard, in part because neither calls attention to himself, but more so because they are willing and able to provide their muscular support, as on "Guitar Slinger," without shortchanging their respective identities. That said, to follow DeSalvo's lines or Grimm's patterns will uncover yet another virtue of Witchy Feelin', even during the stock changes of the appropriately (and ever-so wryly) titled "Vintage Man."

And if it's something of a surprise Simmonds doesn't whip out the slide til "Standing in A Doorway," the belated use of the effect is all the more welcome as he so tantalizingly bends the notes, especially because the bass and drums echo in such a way those instruments surround the pointed guitar. Similarly, the guitarist's bandmates step back to allow the wah-wah to percolate within "Thunder, Lightning & Rain."

Kim Simmonds' independence correlates to a no-nonsense attitude that pervades the to-the-point tracks comprising Witchy Feelin', making it a bonafide pleasure to hear from start to finish. The man's commitment to the blues continues to translate directly to the name Savoy Brown and thereby elevates the stature of both, so designating as closing cut an instrumental ominously titled "Close to Midnight" allows for fitting contemplation of that notion and not just for the duration of that track.