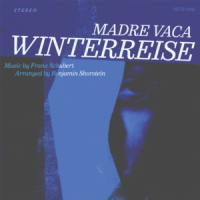 For its third recording, the Florida-based jazz octet Madre Vaca has chosen to perform music by Franz Schubert—hold it; stop right there! Music by who? Yes, that's what it says—music by none other than Franz Schubert (1797-1828), an Austrian composer of what we know as classical music who in his brief lifetime wrote more than 600 secular vocal works, seven complete symphonies (and the well-known "Unfinished"), as well as sacred chorales, operas, and chamber, piano and incidental music. When did he sleep? Alas, history has been unable to answer that question.

That is partly because, in his "spare time," Schubert composed, among other works, Winterreise, a song cycle based on twenty-four poems by Wilhelm Muller that recount the story of a rejected man who leaves his beloved's home to wander away in the middle of a winter night. Madre Vaca (in English, "Mother Cow") uses ten of Schubert's epic themes, arranged by drummer Benjamin Shorstein, as the framework for an album of jazz that moves them forward at least as far as the mid-twentieth century and sometimes beyond. Does it work? Rather well, actually.

No question that this is jazz, nor that Madre Vaca isn't fully invested in the enterprise. When all is said and done, music is music, no matter its genesis, and there isn't much that can't be adapted to harmonize with jazz. And it's jazz we have, blending elements from swing to bop and sounding quite removed from Schubert's creations save for the chordal guidelines on which these newer renditions are based. Even within jazz, however, there are myriad patterns and branches, and Madre Vaca has chosen for the most part to pursue a path that lies somewhere between swing and what has come after. There are occasional nods to the Hot Club of France, as there are to the modernists whose more sophisticated music replaced that primal swing.

The songs themselves are generally pleasant if not alluring, and the same may be said of Madre Vaca whose front line consists of trumpet, trombone and tenor saxophone escorting a five-member rhythm section. Pianist Jonah Pierre, who is by and large grounded in a George Shearing-style groove, is heard from often, as are the relatively more forward-leaning Juan Rollan (tenor sax) and Steve Strawley (trumpet)—although Pierre displays a more modern temper on the fast-paced "Frozen." Guitarist Jarrett Carter and trombonist Lance Reed have some nice moments too, while Shorstein, bassist Mike Perez and percussionist Milan Algood round out the group's supple rhythm section. There is one vocal, in German (singer unlisted; perhaps Shorstein?), on the brief, psalm-like "Sun Dogs."

In sum, this is a respectable effort to intertwine classical music and jazz, performed by an ensemble whose purpose is admirable and whose artistry is the same. If the music sounds a tad dated from time to time, perhaps that is by design. It is, after all, Schubert, and some residual dust on the scores could be inescapable.