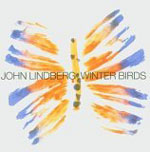 John Lindberg is a deep musician. In almost thirty recordings as leader or co-leader, he has assembled some of the most interesting collections of great players you will ever find. Some of his so-called sidemen have included trumpeter Wadada Leo Smith, drummers Andrew Cyrille and Ed Thigpen, the recently departed Albert Mangelsdorff, and Steve Lacy. Probably what intrigues such important musicians enough to play with Lindberg is that his compositions are not only interesting, but they communicate emotion. His rhythms and melodies bring out happiness, sadness, humour, and more.

Winter Birds builds from the same quartet that brought us Lindberg's highly acclaimed Ruminations Upon Ives and Gottschalk. "Bam! Quatre begins. It's a strangely subtle suite, a sort of minimalist approach to backbeat music. Imagine Frankenstein walking across a dance stage while the band interprets his motions in music. The improvising is kept to a minimum, the short piece clocking in at only two and a half minutes.

"Bam! Cinq swings in five and the pattern for the suite is set—five short pieces, ranging from one and a half to two and a half minutes, in the time signature that the French word implies. Ending the entire suite is "Bam! Sept, starting with, you guessed it, a bass part in seven, though with a little more improvisation this time and an attractive clarinet counterpoint against the bass part.

Moving into the title track, the band becomes more confident (sometimes in the Bam! suite it sounds hemmed in by or unsure of the written material). By "Resurrection of a Dormant Soul, you really feel it opening up and hitting its stride; an explosive bass and drum duo eventually leads into a swinging bass line that moves into one of the strongest, most attractive compositions of the session.

Trumpeter Baikida Carroll's solo is one of the highlights, followed by probably the highlight by Steve Gorn. Gorn plays clarinet, soprano saxophone, and the Indian bansuri flute, on which he is a recognized master (that's him playing in the Academy Award-winning Born into Brothels). His solo on the wind instrument here is breathtaking.

The sonically amazing "Either is really where this quartet excels and sets itself apart from the hard core free jazzers on one side, and the "new mainstreamers on the other. "Siladette Awakening starts with Susie Ibarra's subtle drum solo while the beautiful melody weaves in and out between bass, trumpet, and soprano sax. "The Chicken Fix has a Mingus-like quality, starting with a bluesy dialogue between growling trumpet and arco bass, eventually giving way to a jam over a propulsive bass line that evokes memories of "Haitian Fight Song ... a great way to end the recording!

This is another fascinating chapter in the work of John Lindberg and the second chapter of this particular quartet, which will hopefully continue to grow and record.