Matthias Lupri: Window Up Window Down 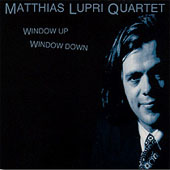 A melodically invigorating session consisting of nine largely easygoing compositions by the quartet's leader, German-born and American-raised vibraphonist Matthias Lupri. The album's title denotes one of Lupri's more prominent inspirations, the window in his Boston apartment through which he often gazes at the passing parade while composing. Through that window he sees "Children," "The Fruitlady," the masses whose faces he sees but whose "Names" he doesn't know, or people who will "Just Say Anything," and aspires to convert these and other fleeting images into song. Lupri, a onetime rock drummer who switched to vibes while attending Boston's Berklee School of Music, seems to have left that genre far behind him, opting instead for the more aesthetically pleasing harmonies favored by his mentor and teacher, Gary Burton. His compositions are winsome but unremarkable.

As befits a former drummer, Lupri is also an unselfish team player, sliding easily into a backup role and allowing tenor saxophonist Verbole to take the lead on most selections. Feuser and de Krom, meanwhile, do little more than lay the taut carpet on which Verbole and Lupri embark upon their leisurely promenades. Both Lupri and Verbole are technically sound, but neither says anything that one hasn't heard many times before. It's extremely difficult for a vibraphonist to sound unlike others, and there are flashes of Burton, Hamp, Bags, Tjader, McFarland and so on in Lupri's wide-ranging lexicon. Verbole's warm, inviting sound is a strong point, and his solos are well-formed, but no more so than many another mainstream tenor.

A promising debut for Lupri, but no more than that.