By Jack Bowers
October 3, 2015
Sign in to view read count 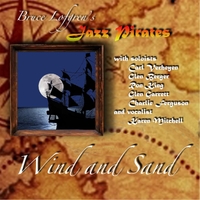 Batten the hatches and shiver the timbers—guitarist Bruce Lofgren's Los Angeles-based Jazz Pirates are climbing aboard with their fourth album for Night Bird Records and Lofgren's eighth as leader of his own ensemble. While these buccaneers aren't really after gold or silver (although a little of that wouldn't hurt), they do fancy that some of their captain's musical broadsides on Wind and Sand may strike their target and inflame some hearts.

Lofgren charts a steady course, weighing anchor with Bronislau Kaper's tantalizing "Invitation" (shuttling between swing and African rhythms) and traversing the seas on the wings of nine original compositions and Paul McCartney's ballad, "Michelle," played in waltz time with a touch more heat than usual. The voyage encompasses three vocals by personable contralto Karen Mitchell, with music by Lofgren and lyrics by Ed Leimbacher. They are, in order, the exuberant "Bop Talk," sensuous "Find a Place" and groovy "Sheet Music," which closes the album. (The lyric to each is enclosed in the album's booklet.) Lofgren, who arranged everything, also wrote "Café Rio," "Far Far Away," "Wind and Sand," "Magic Shoes," "Days of August" and "Gypsy Moon." While none is a classic, neither is any one of them bereft of geniality and charm. In other words, they keep the ship on an even keel, no matter how stormy the weather.

The waters do get choppy from time to time, as on "Wind and Sand," "Magic Shoes" and "Gypsy Moon," the last one of two numbers on which guest guitarist Carl Verheyen solos (the other is "Invitation"). Speaking of soloists, the Pirates boast several standouts on the foredeck including trumpeter Ron King ("Bop Talk," "Magic Shoes," flugel on "Find a Place"), alto Glen Garrett ("Days of August," "Michelle"), tenor Glen Berger ("Sheet Music," soprano on "Far Far Away") and pianist Charlie Ferguson (keyboard, or what used to be called electric piano, on "Café Rio"). The tender "Far Far Away" is a thematic piece, written for Lofgren's grandfather who was called Far Far (the Swedish name for grandfather). The Pirates' anomalous lineup (three trumpets, four saxophones, two trombones, two French horns and rhythm) works well, while percussionists Bob Leatherbarrow and Brian Kilgore  generate enough heat to keep the ship's engine running smoothly. Craig Fundyga's vibraphone is especially pleasing on the ethereal "Wind and Sand."

Thanks to Lofgren's lusty charts and spirited blowing by all hands, these Pirates orchestrate smooth sailing from cast-off to port of entry, earning Wind and Sand high marks for a serene and agreeable voyage.