By GLENN ASTARITA
January 14, 2014
Sign in to view read count 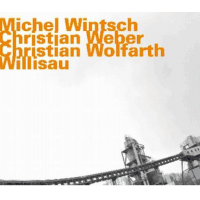 Willisau follows up the Swiss trio's The Holistic Worlds Of (Monotype, 2012) and once again the artists are seemingly intent on routing one's imagination through multiple locations, while not embarking upon a utilitarian approach to the core jazz or avant- jazz piano trio concepts. In fact, the band proffers an antidote to the norm, which can be an exciting proposition, especially if you're looking for something outside the scope of modern mainstream jazz and bop fare. Enamored by a crystalline audio engineering process, the live concert setting contains the esthetic of a studio date.

This democratic engagement kicks off with the thirty-two minute "2.8 Feet Below, Tiny Fellows, Distant Neighbours," as the journey begins amid gobs of counterpoint, contrasting rhythmic structures, and unconventional theme-building stratagems. Pianist Michel Wintsch employs a synthesizer for subliminal effects and off-kilter type oddities. And the trio's asymmetrical navigations, meander around dark pathways and song-forms that may suggest the detection of hidden valleys, and so on. Spiked with dynamic linear runs, bassist Christian Weber's foreboding bowed-lines cast semblances of terror, along with Wintsch's spooky synth treatments and trickling piano ostinatos, the voyage into mysterious environs moves onward.

The trio mixes it up and with drummer Christian Wolfarth's jangling cymbals patterns, additional prismatic colors become another factor within the moving parts. They flirt with minimalism and render a few reflective moments, and then the pianist re-energizes the flow via flailing arpeggios and fractured story-lines. The piece comes to a heated climax and closes with dark sound-shaping electronics in parallel with Wintsch's bristling chord voicings. One of the two remaining works "North West," is a brief and rather jittery jaunt, articulated with staggered currents and maddening cadenzas, where notions of angst and disorientation come to fruition.

One of the outwardly noticeable afterthoughts is that the respective musicians often emulate human voices and emotions within the overall scope. As a team, this unit would be hard to beat. Given their upstanding stature in the global progressive jazz community, the artists' communicate immeasurable synergy during this blockbuster effort. (Excitedly recommended...)