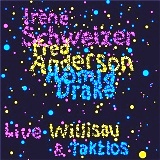 Pianist Irene Schweizer, tenor saxophonist Fred Anderson and Hamid Drake on drums are individually benign forces of nature, no question about it, and the performances documented here testify to the fact. All three players are deeply alert to the integral values of free playing and they mine the seam so deeply that it seems as though their creativity is bottomless.

"A Former Dialogue" is taken as a duo by Schweizer and Drake and the extraordinary empathy of their work is such that the music is so self-contained that any third party would sound intrusive. Both musicians have long been appreciative of the value of rhythmic displacement and that's obvious here in the way that repeatedly and joyously confound the listener's expectations.

When Anderson does come on board for "Trinity" however the title proves more than apt. The fraught logic of his lines, marked as they are by his admirable ability not to resort to screaming through his horn as a means for scoring debatably creative points, ensures that the music never assumes the air of anything like ecstatic jazz or some other marketing concept. Instead the trio asserts the far more mercurial and ultimately unmarketable values of human creativity in no uncertain terms, and not a second of the piece's twenty-eight minute duration is wasted, especially when the listener gets down to the transitory duos that the piece offers up, the long-standing musical relationship between Anderson and Drake being just one of them.

On the opening of "Schwandrake" that relationship comes home. Anderson draws upon a tradition that goes way back in his rhythmic vocabulary and when Schweizer chimes in initially with no more than a pointilliste contribution the music really takes off even whilst the sheer volume level is relatively muted. The result is music seemingly of dimensions the number of which far exceeds the number of musicians making it.

"Willisau" is the shortest piece here, but such is the collective endeavor of these musicians that this doesn't result in musical compression or haste. Instead the music again has time to breathe and the results are accordingly joyous and profoundly affirmative of creativity.

Such is the abundance of life here that listeners might feel aggrieved at missing out on witnessing the performances in the flesh. The value of this recording is thus writ even larger.