By Mike Perciaccante
October 25, 2008
Sign in to view read count 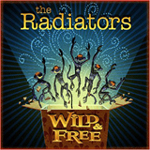 The Radiators were formed in 1977 in keyboard player/vocalist, Ed Volker's New Orleans garage. Still comprised of all of the original members, The Radz—Volker, Dave Malone (guitar/lead vocals), Camile Baudoin (guitar/backing vocals), Reggie Scanlon (bass) and Frank Bua Jr. (drums)—serve up a tasty jambalaya of musical styles that includes Blues, R&B, Funk, Cajun, a touch of Jazz and, of course, rootsy Rock 'n' Roll. This is best evidenced by the fact that fans can find the band's music filed under each of those categories, in a separate New Orleans section in music stores and on-line. The end result and the contents of each CD/LP is great, feel-good, groove-filled, toe-tapping American music.

Wild & Free, released on their own Radz Records label, is a comprehensive collection of old favorites, live performances and unreleased tracks. The two-disc, 28 song collection is not your typical career-spanning "Best Of" or "Rarities" CD. Rather, it is a treasure trove of some of the most beloved of what seems like a 1000 song repertoire representing all that is special about The Radiators—distinctive songs full of heart and soul with building grooves featuring tempo changes, and ambitious unexpected transitions backing up literate and erudite lyrics.

Compiled by and featuring liner notes written by Ed Volker, Wild & Free contains the first officially released versions of the title track, "Cupid's Got A Mighty Arrow" (with it's distinctive bass), "Tear My Eyes Out" (recorded in The Fountain Bay Rehearsal Room) "The Forever Man" and "When Her Snake Eyes Roll" as well as brand-new tracks—the funky rocker "Where Was You At?" and the dreamy, laid-back shuffle of "The Girl With The Golden Eyes" which were recorded especially for this release.

Also featured are live versions of "classic" songs originally released on their three Epic Records studio albums Law of the Fish (1987), Zig-Zaggin' Through Ghostland (1989) and Total Evaporation (1990). These tracks (recorded as early as 1978 at Luigi's Pizza on Elysian Fields Avenue in New Orleans) are funkier and more soulful. Longer arrangements of "Doctor Doctor," "Red Dress," "Hard Time Train," "I Want To Go Where The Green Arrow Goes" (on which Malone vocals are bluesy, soulful and perfect), "Like Dreamers Do," "Oh Beautiful Loser" and "Suck The Head, Squeeze The Tip" (which is actually about eating crawfish)—are rocking, alive, raw and as vital as if they were played/recorded last night in a club or concert hall, which is where The Radiators excel and are truly in their element.

The songs on this collection have been assembled in anything but chronological order, mixing and matching eras and decades, allowing the musical groove to flow from the speakers. Though the recording quality varies a bit due to aging, flooding and the limitations of the source recordings, the performances are warm, easy on the ears and exactly the types of songs that should be found on a career-spanning compilation.

Wild and Free; House of Blue Lights; Suck the Head, Squeeze the Tip; Oh Beautiful Loser; Love Trouble; Where Was You At?; My Home Is on the Border; Like Dreamers Do; Fever Dream; Hard Core; Cupid's Got a Mighty Arrow; I Want to Go Where the Green Arrow Goes; Songs from the Ancient Furnace; The Girl with the Golden Eyes; Hard Time Train; Have a Little Mercy; One-Eyed Jack; Doctor Doctor; The Forever Man; Strangers; Stand by Me Baby; When Her Snake Eyes Roll; All Meat off the Same Bone; Hard Rock Kid; Last Getaway; Tear My Eyes Out; King Solomon Don't Mind; Red Dress.