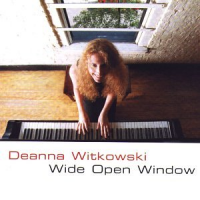 A quick listen to Wide Open Window doesn't really set off any special alarms. It's not the kind of record that reaches out and grabs you, begs attention, or highlights some dramatic revolution in style. But then that doesn't seem to be what pianist Deanna Witkowski is after, really. At the tender age of 30, she's confident enough to hold back on the fireworks and concentrate on substance.

Witkowski's second jazz record trims things down to the classic quartet: piano, sax, bass, and drums. In many ways this music draws heavily from the hard bop tradition. The faster pieces impose a high level of density and energy, bringing '60s Blue Note records to mind but updating that sound with a palpable amount of imagination. (Slower moments tend to be less inspired.)

The leader composed most of these pieces, and there's no doubt whatsoever that she has a good ear for how to put the parts together in fresh ways. "Speak My Name" has an upbeat, almost funky feel, periodically passing through odd shifts in time that would make an average dancer fall over—but that doesn't seem to faze this quartet much. They become almost invisible.

The title track—all nine minutes of it—brings out the best all around. Its gentle swing awawkens right away with a bluesy theme, and an up-front solo by bassist Jonathan Paul makes it clear that everyone's voice will be heard. Things zip ahead later. The strongest feature of Witkowski's playing, here and elsewhere, is her sense of rhythm. Her comping constantly shifts around bar lines, swinging here and there but mostly angling for just the right spot to propel things forward. When she joins the others in trading twelves with drummer Tom Hipskind, it becomes quite clear that the drummer's pulse beats a whole lot more regularly than her own. Her leads, when they rise above an amble, rely on crisp and well-tuned phrasing to impart subtle energy.

The relatively rare moments when Witkowski vocalizes with the music are entirely forgettable. Mostly it's bland scatting which slinks in unobtrusively here and there, but hit stop before the last track—an indulgently cheesy gospel-funk piece where her voice just can't keep up with the melody. As for the rest of these tunes, they provide ample evidence that Witkowski has an aptitude for creative composition and the vision to execute it in style.

Visit Khaeon and Deanna Witkowski on the web.

All Through the Night; New August Tune; Wide Open Windows; From This Moment On; A Rare Appearance; Speak My Name; Just One of those Things; You and the Night and the Music; A Wonderful Guy; Sanctus.