BY TROY DOSTERT
November 11, 2019
Sign in to view read count 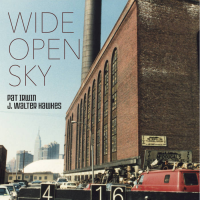 Multi-instrumentalists Pat Irwin and J. Walter Hawkes are long-established veterans who have practically done it all: they've made numerous television and film soundtracks, played with everyone from Norah Jones to the B-52s and recorded in a wide variety of contexts, too many to name. So when the two finally got together for a Long Island arts festival in 2010, it was anyone's guess what they might come up with. The duo's collaboration has ultimately resulted in Wide Open Sky, a set of music as expansive as the title suggests, with a rich atmosphere that evokes broad landscapes and elusive vistas, with a few surprises thrown in for good measure.

Both musicians play various electronics on the record, and in addition each is featured on their go-to instrument: for Irwin, it's a twangy electric guitar, capable of bringing to mind everything from surf music to film noir; and for Hawkes it's his trombone, with a warm resonance that complements Irwin quite nicely. The two put the mood of the music before anything else, preferring a folksy simplicity to showy improvisational feats. The pair's background in composing soundtracks is evident, with memorable themes that don't overstay their welcome in the brief, three to four-minute length of most of the tracks. It's a short album, with ten cuts coming in at just 35 minutes; but the music's melodic heft makes up for what it lacks in duration.

The strength of the recording rests on the unadorned charms of the two players sans electronics—or at least with the electronic embellishments limited to a minor role, as on the opener, "In Another Time," built around a winsome melody from Hawkes that rides gently on a two- note ostinato from Irwin with just the hint of a percussion track in the background. Or "It Gets Late," a jauntier number that allows Hawkes to draw a bit from his jazz experience with an expressive solo that contains a trace of the blues alongside Irwin's flowing arpeggios. "For a Dance" conveys a lot of emotional content, with a delicate melody that eases from Hawkes' horn with a supple beauty, Irwin's plaintive accompaniment providing ideal support for his lyrical phrases.

Elsewhere the album gets a bit too busy for its own good. "Automatic 3" takes its film noir sound in a head-scratching direction with a weird, synthesizer-based robotic chorus that may blur the lines between cool and kitsch a bit too much for some listeners. And Jerry Lordan's "Apache" uses an electronic rhythm track that distracts from the simple purity of the two musicians' instrumental virtues. As good as they are by themselves, one longs to hear more of what they can do without studio enhancements.

Shortcomings aside, it's a treat to hear Irwin and Hawkes making some highly listenable music, and obviously having a great time doing it.

In Another Time; Radiate; February; Automatic 3; Wide Open Sky; Apache; It Gets Late; The Setup; For a Dance; On the QT.