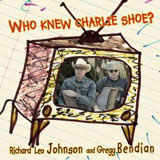 Folklore has it that Shoe—an apparent protégé of McAlister's—came upon Junk Fish (aka Jaden Barrel) at a junkyard, who shared an equally unconventional interest in found objects as percussion. The two were "discovered and recorded at the old church, in the deep American south, where Shoe first encountered McAlister. All this backstory sets the stage for an album that feels less produced and more in-the-moment than Legend, with Johnson assuming the role of Shoe and Gregg Bendian the persona of Junk Fish.

There seem to be no stylistic limits for Bendian. He's founder of the fusion-centric Mahavishnu Project, a group transcending mere homage to the Mahavishnu Orchestra on albums including the ambitious Return to the Emerald Beyond (Cuneiform, 2006), while his under appreciated Trio Pianissimo redefined the piano trio with Change (Aggregate, 2005). He's proven himself an accomplished vibraphonist with his intrepid Interzone band and recorded with Derek Bailey, Pat Metheny and William Parker's Little Huey Creative Music Orchestra. Here, with an arsenal of junkyard brick-a-brack, he helps Johnson create music that's more eminently rootsy than Legend, but an equally logical follow-up with its own share of surprises.

Like Legend, Shoe consists of miniatures (twenty-one of them in fifty-three minutes)—only one longer than five minutes, and most between one and three. For the most part Johnson uses five vintage guitars, purchased for about $100 each on eBay, but they sound like instruments fashioned by the most accomplished luthier, proving it's not always the instrument that defines the sound, but who plays it. Equally, Bendian uses everything from lard cans and springs to rakes and brooms to give Johnson's already propulsive playing even more of a pulse.

It's not all folk music though. "Looking for Vernon is more field recording—musique concrète, even—while the avant-garde leaning "Junk Fish Out of Water is a percussion solo with some precedence in one-time Derek Bailey collaborator and short-time King Crimson percussionist Jamie Muir.

Still, despite a certain off-kilter feel, there's no lack of melodism, with Johnson's virtuosity a hidden means to a very musical end and Bendian's often unexpected textures feeling completely organic. Who Knew Charlie Shoe? is another fine album in a string of winners that, much like Bill Frisell's Americana records, takes a tradition, turns it on its side, and creates something sounding both familiar and new.

Visit Richard Leo Johnson and Gregg Bendian on the web.

Swap Meet Sunday; Rockasilly; Shack in the Back; First Breath in a Bean Field; Little Sparrow; I Believe in Reintarnation; Superman; Like Father Like Son; Junk Fish Out of Water; Jesus on a Tire Swing; Looking for Vernon; Where the Rivers Meet; When I Met Chet; Itty Bitty Ditty; Where the River Meets the Hills; Uncle Toby