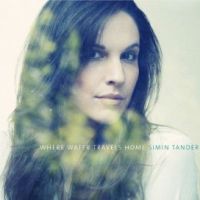 A typical jazz format perhaps, but the delivery on Simon Tander's second CD is anything but typical. As on her memorable debut Wagma (Neuklang Records, 2011), Tander sings in various languages—English, French—and in her improvised language. Here, however, Tander explores her roots by singing in pashto—her Afghan father's language—with mesmerizing results. On Wagma, Tander already sounded conceptually and musically fairly rounded, but Where Water Travels Home comes across as a more mature and personal work, one that reaffirms Tander's credentials as an original contemporary singer.

Tander casts her seductive spell on the opening number, "Yau Tar De Grewan" (A Thread from The Collar), a gorgeous arrangement of one of three Afghan poems sung in pashto. Pianist Jeroen van Vliet, bassist Cord Heineking and drummer Etienne Nillesen provide perfectly weighted support to Tander's emotive delivery on this ode to the birth of love:

"I turned into dew and slept on the morning flower Tired and weary, I slept in the lap of your sight Today you took me to the skies with one smile"

Kabul street sounds provide sympathetic background to "De Kor Arman" ("The Desire for Home"), a slow-burning pashto blues tale. Guest musician Alex Simu's softly voiced clarinet brings a yearning quality to this ambiguous love story. On the upbeat "Larsha Nengrahar Ta" ("Go to Nengrahar and Bring me a Black Dress") Tander's voice dances, driven by guest tablaist Niti Ranjan Biswas and Nillesen's rhythmic urgency. The three pashto-sung songs—poetic in origin and in delivery—mark a bold departure for Tander but the emotive depths that she harnesses so convincingly make these among the CD's standout tracks.

Three tracks feature Tander's invented language: on "Behind the Curtain," thumb-piano delicacy contrasts with Tander's powerful chanson-like delivery; on "Little Song" a damped-piano motif and gently pulsing bass waltz with Tander, whose soft plosives and cooing seduce like a lullaby; the quartet-composed "Far" revolves around Tander's konnakol-inspired improvisations as the quartet's smoking intensity threatens to burst into flames. With the exception of "Behind the Curtain" where Van Vliet stretches out, conventional solos are rationed and instead a subtle elasticity in the music's individual and collective contours reigns throughout.

Several tracks feature lyrics by Tander's sister Mina Tander; on "Above The Ground," however, it's Tander's soaring wordless cry during the song's surging finale that hits the gut; "Dark Woods" is a brooding, sensual song of seduction; Van Vliet's hypnotic piano mantra forms the spine of "Traveling On," a melodically and emotively alluring ballad. Elsewhere, "Where Would I Fly to If I Could" shifts episodically between powerful orchestral passages, Tander's simple narrative and her more dramatic improvisations. "Our Silent Storm" is an achingly beautiful ballad that could have come from Leonard Cohen's bluesiest pen, while "La Chanson des Vieux Amants" sees Tander tackles Jacques Briel's bitter-sweet love song with requisite intimacy.

Tander's beguiling voice holds center stage on these haunting songs of love's vicissitudes, but her wonderfully empathetic trio is no less vital a part of the equation. A palpable group chemistry pervades these thirteen tracks, whose considerable charms grow through repeated listens. Poetic, lyrical and uplifting, Where Water Travels Home is a strong contender for vocal album of the year.

Yau Tar De Grewan; Above The Ground; Behind The Curtain; Where Would I Fly To If I Could; Little Song; Far; De Kor Arman; Larsha Nengrahar Ta; Dark Woods; Our Silent Storm; Water; La Chanson Des Vieux Amants; Traveling On.