Kenny Wheeler & John Taylor: Where Do We Go From Here? 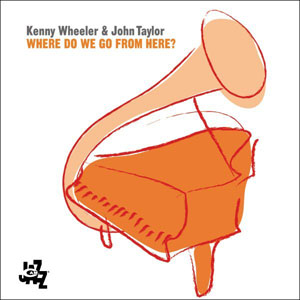 Over the past thirty years, pianist John Taylor has clearly been trumpeter Kenny Wheeler's accompanist of choice. Cerebral yet quietly passionate, intuitive and supportive, with a musical personality rooted in Bill Evans that has, nevertheless, long since evolved beyond comparative considerations, Taylor's ability to get inside Wheeler's often melancholic compositions is without equal. From big band records to intimate settings like this new CamJazz release, Where Do We Go From Here? , Taylor is the perfect foil for Wheeler, and neither have sounded better.

Consisting of one standard, two Taylor compositions and seven mostly-new Wheeler compositions, this particularly warm recording finds Wheeler, always an inward-looking player with just the occasional flare for expressionism, in a particularly introverted mood. His tone is warm, and he avoids, for the most part, the signature intervallic leaps into the stratosphere that mark his more outgoing work. "Mabel" sits somewhere between the more rhythmically-informed version on Wheeler's '84 ECM quintet recording, Double Double You , and Taylor's more abstract reading on his own ECM trio release, '03's Rosslyn. By taking a technique often used more for effect and turning it into another musical expression of the instrument, Taylor opens "Canter N. 1" by plucking and strumming the piano strings in a way that is far more conceptually developed.

While the overall emphasis of the programme is on impressionistic chamber jazz, it is not all moody abstraction. The aforementioned "Canter No. 1" relies on a steady rhythmic pulse from Taylor, while even the darker Taylor composition "Dance" moves along insistently. Still, more open-time pieces like "Forder" and the poignant title track rely more on ambience and harmony than rhythm. All too often standards within a mainly original set seem out of place, but here Al Dubin and Harry Warren's "Summer Night," with its bittersweet and plaintive melody, fits in perfectly with the rest of the programme.

What makes Where Do We Go From Here? such an outstanding recording is the remarkable empathy between Wheeler and Taylor. Years of performing together will typically build a good chemistry between capable players, but Wheeler and Taylor go beyond mere comfort into a level of telepathy that finds them completely attuned to each other. The two are so much a part of each other's playing that the smallest nuance, the tiniest phrase from one can spark a response from the other that moves things in another unexpected direction. Yet their responses to each other are so subtle, so graceful, that these unpredictable shifts feel completely natural, smooth and seamless.

Wheeler and Taylor have a substantial shared discography and have explored intimate settings in the past on Moon , which found them in a trio with Italian clarinetist Gabriele Mirabassi, and Overnight , where they shared the bill with bassist Ricardo Del Fra, but never have they sounded so completely simpatico as on Where Do We Go From Here? , an album that clearly raises the bar for musical interaction by making it so delicate and elegant as to be almost elusive.