Theo Saunders and Intergeneration: When The Saints Go Out 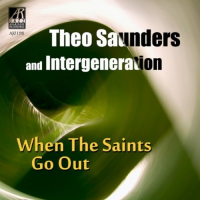 Southern California pianist Theo Saunders is a veteran musician/composer with an extensive resume as bandleader, sideman and musical director. The sparkling sophomore effort, When The Saints Go Out, documents the robust sounds of his Intergeneration group on this Arabesque label debut, a follow-up to Intergeneration (CDBaby, 2011). Originally from The Big Apple, Saunders has lived and performed in both New York and the west coast, where he has carved out a successful professional career. As leader of the Intergeneration sextet, whose members' ages span more than thirty years, he has maintained a presence performing in Santa Barbara, L.A. and throughout the Southern California jazz scene.

There's nothing fancy, showy or conceptual about When The Saints Go Out; the music is pure, straight-ahead jazz with the exception of the opening, New Orleans-style title track. Here, saxophonist Zane Musa Quartet (on soprano) and drummer Tony Austin supply the energy. Buoyed by a sizzling horn section that features two saxophones and trombonist David Dahlsten, the band provides plenty of power-packed moments. The terrific standard, "Old Devil Moon," is the first example of the group's high-octane side, featuring scorching solos from Musa on alto, Chuck Manning on tenor and Saunders' dazzling lines.

The band continues its swinging approach on Saunders' "Camouflage," not hiding a thing but, rather, revealing more of the group's ability to electrify a piece of music with its play. All is not on fire however, as Saunders and the band retreats to the softer side, performing a delicate dance on the beautifully balladic "Lynford's Lament" which, with mellow performances from Dahlsten and Saunders, emerges as one of the outstanding pieces of the set. The hard bop approach of drummer Art Blakey's legendary The Jazz Messengers left a positive impression on Saunders, and that influence is transferred on the up-tempo romp of "The Jazz Messenger" tribute piece.

Saunders and the ensemble slow it down one more time on the very humbling and cushy "For Miles, A Round," but decide to close the album, demonstrating their hard bop mettle, on a rousing rendition of Dave Brubeck's standard, "In Your Own Sweet Way." No question about this project, Saunders and Intergeneration provide a swinging, straight-ahead old school statement on When The Saints Go Out, an appealing, high quality disc that generations of jazz lovers will devour with gusto.

When The Saints Go Out; Old Devil Moon; Lynford's Lament; Camaouflage; Comes Love; The Jazz Messenger; For Miles, A Round; In Your Own Sweet Way.