Home » Jazz Articles » Sun Ra and His Space Arkestra: What Planet Is This?

Sun Ra and His Space Arkestra: What Planet Is This? 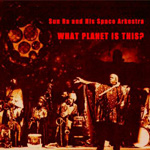 It is appropriate that this double album is being released by Leo Records' Golden Years imprint. Recorded in New York in July, 1973, it features as large an Arkestra as any that Sun Ra put together and includes all of his key collaborators. What Planet Is This? comes from the crucial period when Sun Ra had progressed from cult status to wider recognition, a process aided by a strange alliance with the MC5. But unlike the '50s and '60s (which are well-documented, particularly by the reissue programme on Evidence) or the late '80s and early '90s (covered well, not least by Leo), this period is not well-served by current releases. All of that makes this a welcome issue.

The sound quality is generally good (not always true of Leo's past Sun Ra releases), although some of the balance is rather eccentric; for instance, on "Space Is The Place, the vocals are far forward and the band sounds very distant. In fact, given the instrumentation (thirteen reeds and brass!) the band doesn't sound nearly as powerful as it could or should.

By contrast, the ten-minute version of "Love in Outer Space really captures the majestic power of the band in full flight, driven along by Ra's surging organ, wild, free-blowing horns and massed percussion that creates a massive polyrhythmic groove that is sure to move anyone with a pulse. Just as impressive is a twenty-minute version of "The Shadow World that features a barnstorming big band (again, with percussion aplenty) interspersed with more incredible Ra organ and free-blown improvisations on saxophones and tuba, the latter providing a rich, fruity bass line.

Special mention must go to vocalist June Tyson, whose vocals are pure-toned and powerfully soulful throughout. Her call-and-response "declamations (an appropriate term; "vocals doesn't do them justice) with Ra himself on the title track turn it into a space-age revivalist meeting. Extraordinary.

Another valuable piece in the ever-evolving Sun Ra jigsaw.