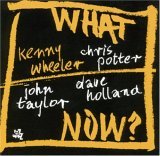 When trumpeter Kenny Wheeler and pianist John Taylor toured Canadian festivals in the summer of '03, the clear high point was their performance at the Montreal Jazz Festival, where they were joined by bassist Dave Holland and saxophonist Chris Potter. Wheeler and Taylor go back many years, working together in a variety of contexts since the '70s. They've also worked with Holland over the years, most notably on Wheeler's ECM recordings The Widow in the Window, Music for Large & Small Ensembles and Double, Double You. Wheeler also had the opportunity to play with Potter on Italian pianist Enrico Pieranunzi's '03 session for Fellini Jazz (CAM Jazz, 2004)

But the performance in Montreal marked the first time everyone had ever worked together as a quartet, and the empathy was so immediate that it just begged to be recorded. A year later this would finally happen, and the result is What Now?, the followup to Wheeler and Taylor's first duo recording for CAM Jazz, Where Do We Go From Here?, and a title that is typical of Wheeler's dry humour and self-effacing personality. In fact, when commenting on this quartet session's lack of a drummer, Wheeler remarked to Ira Gitler, who contributes the liner notes, "This CD could be a Music Minus One for drummers.

True enough, but with the impeccable time of both Holland and Taylor driving the session rhythmically, there's no way a drummer is missed. And, while Wheeler has worked with Holland in a drummer less configuration before—Angel Song, with saxophonist Lee Konitz and guitarist Bill Frisell—this session is far more propulsive and outgoing, and considerably less of a chamber jazz outing than that '97 release.

This programme consists of mopstly new Wheeler compositions—the jazz waltz "One Two Three and melancholy ballad "For Tracy were also on Where Do We Go From Here? and "The Sweet Yakity Waltz" first surfaced on Guest, a recording by the European Music Orchestra that featured Wheeler. One can only be in awe of Wheeler, who at 75 continues to create new music that is distinctive in its somewhat bittersweet texture, consistently harmonically rewarding but also wholly accessible. It's also remarkable that one can so easily intuit the potential for his material to be interpreted in a variety of contexts, from small group to large ensemble. With only a two-horn frontline on What Now?, Wheeler's counterpoint is so vivid that there's invariably the implication of a larger section.

With Wheeler heard only on flugelhorn, there's a richer warmth and smoother blend between his instrument and Potter's tenor. And while the overall approach is lyrical, that doesn't mean there isn't plenty of excitement—every solo on the driving yet relaxed swing of "Iowa City is alive with ever so slightly-contained energy.

With the chemistry and sheer magic of their first meeting in Montreal now documented, one can only hope that What Now? is but the first of many future collaborations.