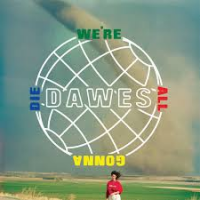 With the benefit of extended hindsight, Dawes' We're All Gonna Die was certainly the most confounding new rock release of 2016, if not the most disappointing. To the credit of the Los Angeles band, the album (or at least its title) did presage the weighty ennui afflicting the culture by the end of the year. But that borderline cynical mindset was couched in a marked change from Dawes' previous folk-rock orientation, overseen by Jonathan Wilson and categorized, at least for a time, as the 'Laurel Canyon style:' the more pop-oriented, innately impersonal approach of the group's fifth studio album was apparently configured to win that very audience about whom Goldsmith and the group offer some borderline scathing observations in original compositions like "For No Good Reason." It's worth noting this thinly-veiled emotional/intellectual undercurrent gives the music a weight it would otherwise lack and further cements the intelligent impression Dawes has left with its previous recordings.

Dawes' current concert appearances, such as their outstanding set at Vermont chanteuse Grace Potter's Grand Point North festival, give the lie to the sacrifice of style represented on We're All Gonna Die. But the band clearly knew something was amiss during recording and reaffirmed that distinct impression with more overt action taken soon after the group hit the road in support (sic) of the LP: early in 2017 Dawes offered a free stream, effectively the composite of a complete concert, titled with no small irony We're All Gonna Live (now available in its entirety as a download from nugs.net).

If nothing else, this gesture compounded the sense Dawes had some second thoughts during the very premise of its latest project and was subsequently disappointed in the marketplace's response to the Blake Mills-produced effort. Yet while We're All Gonna Die may not have garnered the wider commercial acceptance to which it aimed, the alternative album comprised of a series of concert recordings taken from various tour stops also signaled Dawes' resolute will to carry and rightly so selections from the latest record, interwoven in the proper proportion with choices from the heretofore well-established mode of Nothing Is Wrong (ATO, 2011) ultimately make for a more versatile and no less provocative body of work .

It made a certain amount of sense for the band to defer to Blake Mills as co-producer on the sessions. Not only was he an original member of the group when it was known as Simon Dawes, but the multi-instrumentalist and songwriter has had more than a little success as an artist on his own and equally so as producer for the au courant likes of the Alabama Shakes (whose Brittany Howard appears here as vocalist along with My Morning Jacket's titular leader Jim James). And in proffering the title song of We're All Gonna Die in such a markedly different sound than the more streamlined, natural likes of prior records such as North Hills (ATO, 2009), Dawes almost flaunt this drastic change in direction; this second track on the album is a soulful ballad more akin to vintage Hall & Oates than classic Jackson Browne, moving to be sure, but fans of the band may nevertheless hold hope the California-based ensemble's sharp detour in their creative progression is only short term.

We're All Gonna Die might be less significant, at least aesthetically speaking, except that the commencement of the project coincided with at another point of transition: keyboardist Lee Pardini took the place of long-time band member Tay Strathairn. The more polished, structured in which the former musician is dominant comes most clearly to the fore with "When the Tequila Runs Out," a skewering of faddism and self-indulgence as infectious as it is incisive."One of Us," is maddeningly addictive as well, a number during which Dawes' titular frontman Taylor Goldsmith is most delightfully animated in concert.

"Quitter" is almost equally catchy as those two cuts, its comparable electro-pop overlay representing the sonic alteration Mills oversaw. Fortunately, the synthetic textures superseding the customary mix of acoustic and electric guitars are components in an overall audio mix that booms full and deep. It's worth noting Pardini's contributions on stage center on organ or piano and remain in correct proportion to Goldsmith's fretboard work and that of Dawes' road-mate and primary soloist, guitarist Trevor Menear ).

To be fair to Mills, his participation in playing as well as producing no doubt helped cushion the impact of the personnel turnover that might've otherwise led to a more unsettled sensation permeating the sessions. But Dawes were wise to fully integrate Pardini into the mix too, if only to render him comfortable from the very start; it's telling, not to mention encouraging, that the aforementioned opener sounds like a commentary on the band's stylistic shift, because if that were not the case, chief songwriter and main lead vocalist Taylor Goldsmith might end up sounding like he's making a solo album accompanied by sidemen rather than the titular leader of an integrated unit band on whose behalf he speaks with such self-awareness during "Roll With the Punches."

The predominately slick approach nonetheless threatens to give short shrift to otherwise memorable material such as "For No Good Reason." But the quietly reflective persona Goldsmith has nurtured through the previous Dawes albums fortunately ends up only slightly camouflaged behind the sonic polish and while the cosmetics are as undeniably attractive for contemporary music-lovers as the star-studded vocal accompaniment (at various points also including Mandy Moore and Lucius), those superficial aspects of the arrangements, despite functioning as selling points, ultimately become a distraction for newcomers to Dawes as well as their enduring fans. In retrospect, it's little surprise the expected broadening of the group's audience demographic ended up a wash.

Dawes just avoids sounding hollow on "Picture of A Man," but the surface allure applied to this record falls away completely for "Less Than Five Miles Away," a vivid composition arranged and played in a suitably forceful manner in which the insistent drumming of Taylor's sibling Griffin locks in with the similarly prodding bass of Wylie Gelber (the duo a very noticeable factor in live performance). It's the most successful cut on the album followed in short order by the almost equally astute "Roll Tide: " strings enhance the forlorn quality of the younger Goldsmith's singing and because he is otherwise surrounded by biting instrumental accompaniment from the band, this track turns into a striking instance in which Blake Mills properly forged a powerful track from the material (perhaps because he is co-author of the tune without any input from Dawes).

"As If By Design" works almost as well as mere modification of the direction Dawes was honing on the David Rawlings-supervised All Your Favorite Bands (Hub, 2015), an arch piano combining with trumpet from Nate Wolcott conjures a picturesque setting matching the imagery of the meticulously-crafted lyrics, another knowing piece of writing and recording that belies its antiseptic production style. As such, the track augurs well for Dawes' future, especially in the broad context of stage and studio because it rings so true as an emphatic final punctuation to the subliminal statement lying within We're All Gonna Die.

One of Us; We're All Gonna Die; Roll with the Punches; Picture of a Man; Less than Five Miles Away; Roll Tide; When the Tequila Runs Out; For No Good Reason; Quitter; As If By Design.