By JOHN EYLES
January 7, 2017
Sign in to view read count
As Weekertoft approaches its first anniversary, its teething troubles seem over as it is settling down into a pattern of releasing music regularly. Of the label's two latest releases, one is on CD, the other a download, a balanced approach that seems likely to become the norm. The download release is significant for two connected reasons: it is the label's first release not to feature one of its proprietors, guitarist John Russell and pianist Paul G. Smyth; and, with music dating back to 2000 and 2001, it is also the first time that Weekertoft has dipped into the vast archive of recordings from the monthly Mopomoso concerts, in order to issue older music. The prospect of other music that could emerge from the vaults is mouth-watering....

Following hot on the heels of the download release of Paul G. Smyth's fine solo album The Warning Signs comes this welcome CD release by the duo of Smyth and US improvising drummer extraordinaire Chris Corsano. It was recorded in April 2015, at the National Concert Hall in Smyth's native Dublin, a venue at which he has regularly performed in duos with such high-profile performers as bassist John Edwards, cellists Hannah Marshall and Okkyung Lee, saxophonists Alan Wilkinson, Evan Parker and Peter Brötzmann, trombonist Sarah Gail Brand and—most relevant to this album—drummers Ståle Liavik Solberg and David Lacey, such encounters having sharpened his skills as an improvising duo player.

Given that Corsano also has an extensive track record in duos—notably with saxophonists Paul Flaherty and Joe McPhee, and guitarist Bill Orcutt—when he and Smyth met, it seemed that sparks were guaranteed to fly. As the YouTube clip from the performance demonstrates, that was certainly the case, with both of them playing full-on right from the start, and neither hiding from the demands of the encounter.

With the energy and focus on display, it is tempting to compare the meeting to two heavyweights coming toe-to-toe, prepared to slug it out... but that would not do it justice, as it would ignore the co-operation and empathy between the two. A better analogy is of a cordial but heated discussion, with each point made by either player being considered, developed, commented upon and then refuted or accepted by the other, in an ongoing back-and-forth exchange that is rich in detail.

Across the three tracks, totalling over fifty-five minutes, there are occasional periods where one or other is alone in the spotlight—building a protracted solo or injecting an individual flourish—but neither player seeks to dominate the other. Instead, the two contribute equally to the music's impressive variety, momentum and musicality. Their music is guaranteed to quickly draw in listeners and keep them engaged throughout. Please may this duo become more than just a one-off encounter. 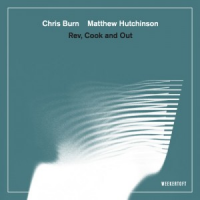 The duo of Chris Burn on trumpet and Matthew Hutchinson on synthesisers (the latter should not be confused with the US pianist of exactly the same name) is in stark contrast to the Smyth-Corsano for several reasons. Both Burn and Hutchinson are from an older generation than Smyth and Corsano, and have been actively involved with Mopomoso and Fete Quaqua from the start. The two have played together for decades, dating back at least to 1990, when Hutchinson was a member of Burn's Ensemble that recorded Cultural Baggage (Acta, 1990), alongside John Butcher, Jim Denley, Phil Durrant, Marcio Mattos, John Russell and Stevie Wishart—an impressive line-up.

Burn and Hutchinson are a long-established duo, their first released recording being on Freedom of the City 2002: Small Groups (Emanem, 2002); the music here pre-dates that, having been recorded in October 2000 and June 2001 at The Red Rose, the home of Mopomoso for many years. Burn and Hutchinson can be seen together on many YouTube clips, including that below from 2014. With so much shared history, it is hardly surprising that the pair are empathetic to the point of telepathy. The fact that Burn is himself a pianist, albeit a very different one to Hutchinson, doubtless strengthens the bond between them. It may also be the reason that Hutchinson, despite being a formidable pianist, plays synthesiser here rather than piano. Whatever the reason, the combination of synth and trumpet works very well, producing an unusual but appealing soundscape. The two are equal partners, rather than the synth acting as support or accompaniment, each of them constantly searching for sounds to complement those of their partner.

Rather than Smith and Corsano's heated debate, this comes across more as a friendly chat between two old mates who are enjoying each other's company. Across the three tracks whose titles are combined in the album title, just under an hour of music, the two give a master class in sympathetic listening, never losing touch with one another; reacting to each other, they constantly manage to move their music forward without any hint of repetition, deviation or hesitation. The end result is a textbook example of duo improvisation. Out of the many hours of archive recordings at the label's disposal, it is easy to see why this one was chosen for release. Although very different, both these releases auger well for Weekertoft's future.

Tracks: Taming in the Power Cut; The Through Line; Psychic Armour.

Rev, Cook and Out