By JOHN EYLES
September 24, 2016
Sign in to view read count
The Weekertoft label was set up jointly by English improvising guitarist John Russell and pianist Paul G. Smyth of the Irish rock band The Jimmy Cake. Their partnership dates back to September 2001 when they played as a duo at Project Arts Centre in Dublin, followed in December 2001 by a duo at Mopomoso, the London-based improv club that the guitarist has hosted every month since 1991. (YouTube footage of the duo, filmed by Helen Petts, in 2010, can be viewed below.) With an extensive archive of recordings from past Mopomoso gigs, the new label has plenty of fine music to draw upon for its releases.

Weekertoft got off to a flying start, in early 2016, with the release of Making Rooms, a lavish four-CD box set recorded during a 2013 Mopomoso tour of England featuring some of the country's best improv players. As with many independent labels, Weekertoft runs on a shoestring budget, so it came as no surprise that its two subsequent releases are not on CD or vinyl but are downloads. Maybe unsurprisingly, those two releases feature the label's proprietors... 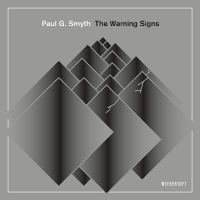 Recorded in July 2010, in his native Dublin, The Warning Signs consists of two extended improvisations that capture Smyth alone at the piano and in fine form. The half-hour long "The First Sign" opens quietly and gradually reveals a selection of the sounds that will form Smyth's palette, including struck single notes, scraped strings and prepared notes. Seamlessly, the music becomes more coherent as he gradually increases the volume while making the transition to a series of arpeggios that are allowed to ring out undamped.

In typical style, Smyth explores various combinations and possibilities in ways that sound unplanned and unforced, as though driven by his own curiosity and sense of discovery. For the listener, the overall effect is to radiate a sense of calm and tranquillity that is very easy on the ear. Smoothly through the gears, he moves onto a prolonged passage characterised by resounding chords which build to a tumultuous climax before coming down for a subdued final passage. Throughout the piece, the music retains a sense of control and is never remotely chaotic.

Remarkably, Smyth repeats the feat on the second track, "The Third Sign," coming up with a piece that is just as fresh and inventive as the first, without displaying any signs of falling into well-worn pathways or standby tricks. Together, these two tracks provide ample evidence in support of the description that has been applied to Smyth, "One of the most exciting musicians working in Ireland at the moment."

The good news is that Weekertoft plans to release a duo recording of Smyth with drummer Chris Corsano. Until then, savour the YouTube clip below of Smyth alone at the piano. 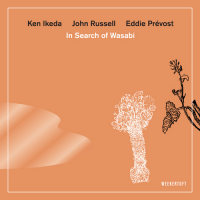 This trio was recorded at London's intimate Hundred Years Gallery in September 2015, when it was part of the opening concert of a two-week Ken Ikeda season at the venue. The album's sole track runs for just under twenty-six minutes, but it is valuable for being the first released recording by this trio of musicians or any two-member subset thereof. In the case of Ikeda, that is unsurprising as his discography is modest and includes few UK recordings. But, given the prominence of both John Russell and Eddie Prevost on the London, UK and world improv scene, it is surprising that they had never recorded together before their combined ages topped 130! So, quite a coup for Weekertoft.

Given their relative lack of experience together, it makes enthralling listening to hear the three combine together and work out how they fit in with one another. There is no clear-cut distinction between lead and support instruments here, with all three straddling the boundary between the two roles, sometimes adopting one of them, other times the other. Crucially, the recording by Daniel Kordik is high quality so that the three can all be heard clearly throughout.