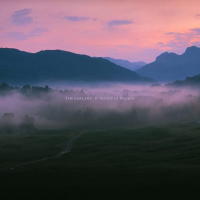 Taking his inspiration from the scenic magic of England's Lake District, saxophonist and composer Tim Garland has translated the natural beauty of the landscape into an equally breathtaking suite. From the opening track "Rugged Land," it's clear that this is no ordinary chamber jazz. The dynamics are often forcefully percussive, but impressively so, considering the ensemble is devoid of percussion or drums. This is a brave departure from his previous orchestral double album Songs To The North Sky (Edition, 2014), written in 2012 for his jazz trio Lighthouse and the Royal Northern Sinfonia. A trio is featured on the first CD and the orchestra (plus drums, percussion and bass) on the second.

Regarding this Grammy-winning musician's influences, his presence on Chick Corea's symphonic jazz work The Continents, Concerto For Jazz Quintet & Chamber Orchestra, (Deutsche Grammophon, 2012) must have been a contributing factor. Or maybe it was Corea's Piano Concerto No. 1 (Sony Classical, 1999), from a decade earlier, of which Garland was likely aware. Garland's metier is clearly for writing subtle and sophisticated pastoral arrangements as evidenced here, on the aforementioned Songs album and even, to some extent, on his previous, highly acclaimed recording, One (Edition, 2016).

His soloing over the string octet, evincing a surprisingly full sound, varies in emotional impact. Sometimes his wistful soprano saxophone recalls that of Jan Garbarek as on the title track where he's accompanied by pianist Jason Rebello. At other times the pieces are more thematic, "Black Crag," for example, which here is accompanied by pianist Pablo Held. The third jazz musician on the album, Yuri Goloubev plays a vital role, his sonorous double bass stolidly anchoring pieces such as "Altitude." On the delicate, languid "Magic Box," Rebello, Goloubev and finally, Garland on tenor saxophone, solo successively, each with impassioned vibrancy. The concluding track "The Sigh Of The Land," again featuring Held on piano and joined by Garland on soprano saxophone, is emblematic, both in title and content, of the composer's love affair with nature, and in particular, the spectacularly picturesque corner of this sceptred isle.

Rugged Land; The Snows; The Sky Is An Empty Mirror; Gaia’s Clock; The Lady In The North; Angry Sun; Weather Walker; High Fell; Black Crag; Altitude; Magic Box; The Sigh Of The Land.