By CLIFFORD ALLEN
November 30, 2008
Sign in to view read count
In the nearly fifty years that have passed since saxophonist Ornette Coleman recorded the double quartet Free Jazz (Atlantic, 1960), freedom has become a relatively accepted approach to practicing improvisation and composition. So much so that a group like the Vandermark Five, which has its own history, can record four volumes of Free Jazz Classics (Atavistic, 2003/06). Conversely, Scandinavian power trio The Thing (Mats Gustafsson, reeds; Ingebrigt Haker Flaten, bass; Paal Nilssen-Love, drums) can wax interpretations of rock and punk tunes in the "free" idiom. For the most part it would seem that vanguard improvisation has become something acceptable to the jazz public, especially considering how connected musicians and followers of the music are worldwide through online resources—for all intents and purposes, it's a valuable niche. But the idea that free music can still have a "shock" to it is becoming increasingly rare, as one hears saxophonist X's circular breathing on album after album, or certain pianists having a rather codified approach.

Drummer Weasel Walter's music, while still having the parameters of a certain language within free improvisation, does "shock," as well as move with extraordinarily brutish force, though it hasn't really become well-known among even the more esoteric avant-garde listening public. Part of that might stem from pigeonholes created while he was in Chicago and associating with avant-garde rock musicians like Jim O'Rourke and Kevin Drumm, though his Flying Luttenbachers group was anything but avant-rock. Now based in Oakland, Walter's steady partnership with bassist Damon Smith has resulted in energy music that's refined and clear, without being any less woolly and perverse. 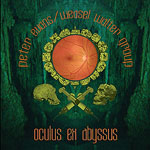 Oculus ex Abyssus joins Walter and Smith with New York-based trumpeter Peter Evans and tenor/soprano saxophonist Paul Hartsaw on two side-long originals. Yes, side-long: this is a vinyl release, something that Walter has done occasionally throughout his label's existence. With altoist James Fei in place of Hartsaw, the quartet also released a companion volume on a limited edition CD-R.

"The Eyes of Hell" takes up the first side, and one thing is made abundantly clear from the opening bars: despite the use of extended techniques from all musicians, the improvisation concerns phrases and their relationships as much as it does pure sound. Evans' approach consists of brittle, barbed and guttural multiphonics, like Nate Wooley fairly thin but darting less and covering a broader area. Smith's arco mostly takes advantage of subtones rather than high, winnowing harmonics. At the outset, trumpet and tenor cut broad circular-breathed paths as bass and drums trade volleys in sashays of increasingly complex inversions. Walter's relentless staccato athletics and quick assembly of individual notes and gestures teases something similar out of reeds and brass, while at the same time Evans' quick elisions cause the drummer to tighten and blur his phrases, a continually evolving relationship of the broad and distinct. Such description may beggar the idea that this is wanton back-and-forth exercise but far from it: this quartet makes seamless and extraordinarily graceful music that's never without a sense of peeled-back rawness. 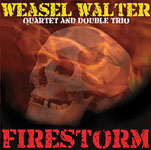 Firestorm is a somewhat different beast, bringing Walter and Smith together in three different aggregations: two quartets and one double trio. The latter adds drummer Marc Edwards and bassist Lisle Ellis (who also contributes environmental electronics to "Shock Troop"), alongside altoist Marco Eneidi and tenor man Elliott Levin for two pieces recorded at New York's Tonic. The remaining five improvisations were culled from performances at the city's Stone and a guerilla-style house show in Philadelphia, with Eneidi and Viennese reedman Mario Rechtern (Reform Art Unit), or Levin and Sun Ra Arkestra altoist Marshall Allen in the woodwinds chair. Whereas Oculus ex Abyssus is spacious and open even in passages of extremely dense phrasing (almost chamber-esque midway through "Ex Malum Adveho Sonitus"), Firestorm consists of fullness from every angle.

The opening "Ignition," by the double trio, finds detail subsumed to a rolling mass, amplified basses providing a gooey bottom over which Levin and Eneidi are full blast in scorched overblowing, ecstatic horn webs the likes of which haven't often been heard on record since the days of Arthur Doyle's Alabama Feeling (Ak-Ba, 1977) or even Sunny Murray's Sunshine (BYG, 1969). The saxophonists don't skate over the top of the rhythm section as much as twist and slip in and out of it, and there is an element of pulse to the pitch and yaw of Edwards, Walter and two basses. While drum phrases are less discernible here, nevertheless there is clear motion and a space between Edwards' tom-heavy polyrhythms and Walter's accented quilt that begets a surging swing. The barrage of single drum notes is clearer on the title track, Levin's glossolalia front and center as Allen pirouettes unhinged around him.

At twenty minutes, "Meditations on Violence" is the most stretched-out track here, though the amount of activity renders it a flash. Walter's lightning-strike precision is on full display (and jaw-droppingly mated with Smith's arco grit), and moments of tense reprieve narrowly appear only to be subsumed—Rechtern's electronics, or his zurna (Macedonian oboe) in individual conflagrations with drums and bass. Eneidi, meanwhile, tears through the modern alto's lineage from Jimmy Lyons and out through the other side. Weasel Walter, Damon Smith, and their mates have a tempestuous muse, but it brings with it an extraordinary amount of drive, conviction, and artistry that might make us realize how much we're missing.