By Troy Collins
November 8, 2008
Sign in to view read count 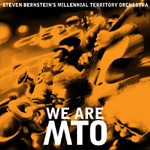 From his career-defining work on the score to Robert Altman's film Kansas City to his recent arrangements for producer Hal Wilner's various projects, trumpeter Steven Bernstein has ascended from the ranks of the underground to attain a level of recognition that few musicians of his caliber receive.

Bernstein's rough and tumble Sex Mob quartet has been tearing down musical boundaries for well over a decade, but it is his large ensemble, the Millennial Territory Orchestra (MTO), that offers the most complete view of his multifarious abilities. Conducting a phenomenal group of soloists, he limits his wildly expressive brass excursions to brief interludes, proving himself a magnanimous bandleader as well as a stellar arranger.

Inspired by his work on Kansas City, Bernstein established the MTO to update the vintage sounds of 1920s and 30s Midwestern territory bands for a new century. Featuring the same line-up as MTO Volume 1 (Sunnyside, 2006), We Are MTO is both more relaxed and adventurous than their delightful debut.

Continuing a tradition established by Lester Bowie's Brass Fantasy, the MTO offers stirring avant-garde interpretations of classic swing tunes and contemporary pop hits, such as "All You Need Is Love." After a brief, blistering fanfare, the band settles into a dreamy rumination on the aforementioned Beatles song led by Doug Wieselman's silver-toned clarinet. As the tune leisurely gains momentum, it builds to a blustery finale of gospel-inspired ardor. Don Redman's "Paducah" follows a similar path, trafficking in a down-home blues groove bookended by testimonial fervor.

Other rootsy classics, like the Ray Charles vehicle "Makes No Difference" and Fats Waller's "Viper Song" are given soulfully droll vocal renditions by guitarist Matt Munisteri and guest guitarist Doug Wamble. The band summons the vivacious swing of the thirties on "In a Corner" and "Dickies Dream." The rhythmically infectious tunes deliver a series of pithy solos, the former ends on a pneumatic run from Erik Lawrence's baritone, the later spotlights a spiky acoustic duet between the guitarists.

Bernstein's Millennial Territory Orchestra conjures the primal elation of Pre-War swing bands without falling victim to the past; their interpretations are not intended to be historically accurate, but they capture the enthusiasm of early jazz with a passion few contemporary musicians can. Accessible, joyous and soulful, We Are MTO is Bernstein's most heartfelt and purely enjoyable recording to date.