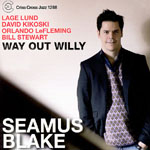 It's been six years since Seamus Blake's last recording for Criss Cross, and the tenor saxophonist wasn't thinking about a new one until approached in 2006 by label owner/producer Gerry Teekens. The result, Way Out Willy, has the spontaneous feel of a session more focused on improvisation than composition.

That's not to say the six Blake originals are anything but thoroughly engaging. But in a time where his contemporaries are often approaching the modern mainstream through more complex compositional constructs, Blake's writing is more concise. With the exception of the burning modal 5/4 "Badlands and the broodingly expansive 9/4 "Hoi Polloi there are no irregular or shifting meters to be found, nor are there any long-form episodic pieces.

With compositions ranging from the insistently swinging "Fear of Roaming to the gently lyrical "Trust in You, the rhythm-heavy title track, or the simmering "The Jupiter Line, it ultimately all comes down to the players. With guitarist Lage Lund and pianist Dave Kikoski, Blake has two strong foils, capable of exploring improvisational possibilities at length without losing focus or sense of purpose. Drummer Bill Stewart (the "Willy in "Way Out Willy ) is as elastic, responsive and melodic as ever, while bassist Orlando LeFleming—best known for his work with singer Jane Monheit—demonstrates a side to him that's rarely been heard on record.

Blake, still in his mid-thirties, is a powerful player possessing that rare ability to develop lengthy solos that are both visceral and cerebral. Few artists are capable of delivering near-perfection every time but Blake is one of them, with nary a misstep here and a consistent ability to create a clear narrative with every solo.

Kikoski, with nearly twenty appearances on Criss Cross as a leader or sideman, is the closest thing to a label house pianist. His own Limits (2006) was an album of great conversational depth, and he brings that same aesthetic to this date. Working with another chordal instrument, in this case Lund, is always a challenge but the two are never anything but complimentary.

As unequivocally strong as everyone is on the date, it's Lund who stands out, if only because he's a younger player with a small but increasingly significant discography that includes Marcus Strickland's Twi-Life (Strick Muzik, 2006) and two superb guest spots on trumpeter Ingrid Jensen's At Sea (ArtistShare, 2006). Like Blake and Kikoski, Lund is a master of construction, with a warm tone that's reminiscent of Pat Metheny, but far less processed. His solo on "The Jupiter Line, in particular, builds in intensity through use of repeated motifs that gradually lead from one place to the next in logical but exciting fashion.

Way Out Willy is an unassuming and thoroughly satisfying set filled with improvisational prowess that's never superfluous. Blake's strength as a writer is his ability to create a diverse set of contexts that encourage the many strengths of everyone involved.

Fear of Roaming; Badlands; Trust in You; Way Out Willy; Hoi Polloi; The Jupiter Line.