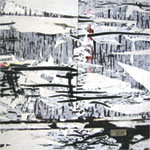 Butcher and van der Schyff had previously played as a duo at the festival and other concerts and the drummer and Muller have also worked together. Their intertwined histories provide a sense of familiarity, bolstering their confidence as the music develops chancier ideas. Tentative probes of sputtering sax and warbling bowed bass open as the trio settles in, soon unfurling in sweeping dynamic arcs that build intensity then recede to nuance. The improvisers all take turns prodding the music, the others uncannily responding in an instant.

Alternating between and using the full ranges of tenor and soprano, Butcher extends the trio's sonic potential. He also judiciously uses multiphonics, creating the illusion of two horns, as in the ghostly introduction of "Magic Clock Machine." Muller wields his bow to tease the upper register and often blends with the horn's piercing notes. He avoids obvious lines, preferring to color abstractly and shape the proceedings with thick notes and percussive flourishes that sound like prepared piano. Likewise, van der Schyff eschews beats, using the full kit to shade with rumbling toms, scraping cymbal edges or clattering sticks across the rims. The kinetic burst of "Gone, Goner" finds the trio playing more tightly, an effective epilogue hinting at another path.

What might have been a one-off became an auspicious beginning for the trio: building on their affinity for each other's playing, they have performed a handful of dates since.

haufig eine hydraulische Metaphertendenz; Magic Clock Machine; Sibila e Succhia; Sharpening the Windings until they roll up, roll up and snag on the point of the Tear; Taktgebertendenz; Gone, Goner.