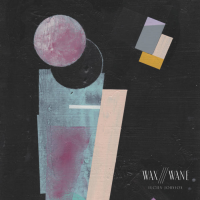 While Lucien Johnson is a dab hand at playing and composing, he is even more skilled at weaving a piece of music. Flow and dynamics are the specialties he displays most here, sketching out a series of groove patterns, and smoothly guiding an eclectic quintet as they ride through the ebbs and swells. Wax///Wane is not just a poetic title, it is a mantra to which he commits in every way during this beguilingly evocative half-hour-plus set.

Based around momentum and groove, these pieces already lend themselves naturally to drifting until you have no idea how much time has passed. Just in case that would not be floaty enough, Johnson backs up his light-coasting rhythm section with the dreamy tones of vibraphone and harp. The themes revolve around the beauty of nature and its cycles and rhythms. There are heads and key melodies here, sometimes catchy ones, but the affair smolders and simmers hazily enough that it feels elusive all the way through.

Johnson sometimes takes flight while the sextet drifts; he adds several clear soaring solos when the band reaches a busier energy level, his tenor tone providing just a little more weight but never too much. In between, he floats in circular patterns, and shades around the edges no more or less than anyone else. It is just as well; too much busy playing from anyone would only over-season the soup. As it is, the patient unwinding and collective restraint produce an experience subtle and most inviting.