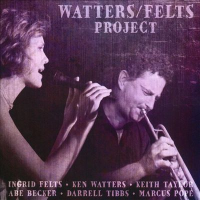 On The Watters / Felts Project, Ken Watters, a fine trumpeter, and his quintet are confined for the most part to escorting singer Ingrid Felts as she wends her way through five present-day compositions, Billie Holiday's "Fine and Mellow" and the standard "I'll Be Seeing You." Is it a good idea? That depends in part on one's response to Felts' casual, blues-based vocal style. The opinion here is that her performance is for the most part adequate but no more than that.

Another aspect of the dilemma lies within the songs themselves. As is the case with so many contemporary themes, the lyrics, which must have made perfect sense to whoever wrote them (Felts' name is on each one, though she is not explicitly named as lyricist), are by and large inscrutable. That is especially true of the shuffling finale, "There It Is," the only track recorded live (at The Crossroads in Huntsville, AL), on which Felts and the band are, according to Watters, simply jamming and making things up as the song unfolds. It's generally muddled and at least three or four minutes too long.

Completing the album are a pair of engaging instrumentals, bassist Abe Becker's loping "Contrapunto Cubano" and Watters' sunny "Port-au-Prince," on which the quintet is able to spread its wings behind pleasing solos by Watters, Becker and pianist Keith Taylor, complementing sharp percussion work by Darrell Tibbs and drummer Marcus Pope. Felts adds a wordless vocal on "Port-au-Prince," written by Watters to exemplify his admiration for the Caribbean island of Haiti.

After listening to Felts wander through "Somerset Road," "Where've You Been," "Open" and "Waiting," it's a pleasure to revisit Sammy Fain's "I'll Be Seeing You," even though her vocal there is unimposing. Taylor ransoms the track with another splendid solo. "Fine and Mellow" is of course the personal property of Billie Holiday, and any new version must suffer by comparison. While there's no doubting that everyone involved believes in the Watters / Felts Project, the best grade that can be given for its introductory enterprise is a conclusive "e" for effort.

Fine and Mellow; Sommerset Road; Where’ve You Been; Contrapunto Cubano; Open; Waiting; Port-au-Prince; I’ll Be Seeing You; There It Is.