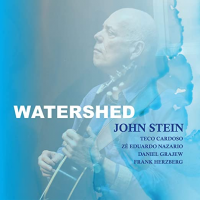 Jazz guitarist John Stein has produced many recordings throughout his career. Watershed is his fifteenth album and a special one at that, marking his retirement from academics and the beginning of a new chapter in his life. A former professor at Berklee College of Music (his alma mater), Stein is now fully engaged in producing the deep grooves and rhythm-based and breezy-styled melodies that make this album such a wonder to listen to, repeatedly.

The particulars of this recording make the Brazilian influence obvious, as the light and delicate opener "Rio Escuro" reveals, though less prominent on the perky and aggressive "Kobe," where the drummer and guitarist push and pull throughout the tune. The two opening pieces are among seven Stein originals, though he also includes several standards including the Ric Marlow composition "Taste of Honey," featuring a delicious Stein arrangement.

The soft spot of the album goes to "Mystified," finding Nazario on the brushes, Grajew on light keys and the leader plucking the strings with warmth. "Wally," however, is just the opposite, showcasing the entire band on a playful and frisky moment. Saxophonist Cardoso comes to the fore playing the alto on Joe Henderson's "The Kicker," while the leader delivers a new rendition of guitar great Jim Hall's "Waltz New."

A truly tender highlight and keeper of this set belongs to Stein's interpretation of the Henry Mancini classic "Dreamsville," as the music begins to wind down revealing a few more precious encounters to enjoy such as "Charlotte," "Cisco," before closing on the boisterous and explosive "The Hang."

Clearly a Watershed moment for John Stein who crafts one of the most compelling recordings on the jazz landscape today. Complete with musicianship, talent and noteworthy on many fronts, this is one album that is enjoyable from beginning to end.