BY JIM SANTELLA
August 1, 1999
Sign in to view read count 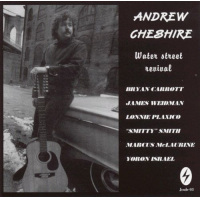 Mainstream jazz guitar has a universal appeal because of its natural timbre and the graceful articulation that can be achieved through practiced dexterity. Andrew Cheshire incorporates those elements plus a melodic sense that lends itself to smoother ballads ripe for a wider radio market. Recorded in 1990-92 with three different units, Water Street Revival draws together the various roots that make up the guitarist's unique sound. This is Cheshire's third album as a leader; a fourth, Relax, Keep The Tension, Please , was released in 1998 on the CIMP label.

Except for Cole Porter's "I Love You," Water Street Revival features the guitarist's original compositions. Cheshire's brief melodies are wrapped in interesting arrangements that change meter and tempo frequently. The system allows for much improvisation by each of the artists. The three drummers are tasteful in their choice of accompaniments, while the respective bassists pulse clearly and with variety. The pairing of vibes with guitar on the first four tracks produces a pleasant and distinctive sound. Cheshire's guitar gives us a vocal quality with which we can feel comfortable through both the lyrical ballad and the up-tempo burner.