By BRUCE LINDSAY
September 2, 2012
Sign in to view read count 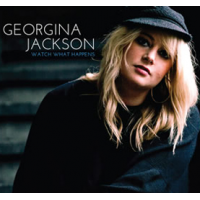 Georgina Jackson is an avowed fan of "cheesy disco." She's similarly enthusiastic about Frank Sinatra, big bands, the American Songbook and PG Tips tea (which gets its own acknowledgement in the sleeve notes). The native of Wigan, in the north of England, is also a talented trumpet player and a singer with a sassy, vibrant style. Her second album, Watch What Happens, puts all of this together and it's a winning combination.

As a trumpet player Jackson has performed with Nancy Sinatra, Gladys Knight and Seal, as well as in the orchestras of West End shows such as Chicago. Her singing career has emerged gradually in recent years—performances with the BBC Big Band and the Ronnie Scott's Jazz Orchestra have helped to raise her profile. She released her debut album, Til There Was You (Self Produced, 2006) under the name Georgina Bromilow, but now uses her mother's maiden name professionally.

Watch What Happens showcases Jackson's vocal talents: her trumpet playing features on only three tunes. Most of these songs were recorded at London's Abbey Road Studios in April 2009 with a big band led by Pete Long.

While Jackson's voice has a genuine '50s vibe, the string arrangements often have more of a '30s feel. Andy Schofield's lush, romantic, arrangement of Irving Berlin's "Change Partners" would make Fred Astaire feel right at home—it's certainly the perfect setting for Jackson's vocal and Jim Watson's fleet-fingered solo. Hoagy Carmichael's "I Get Along Without You Very Well" is more melodramatic, "I Won't Dance" is jaunty and upbeat. On Long's arrangement of "Lover" the band really lets rip: it's a punchy, swinging, performance with the trumpet section and drummer Elliott Henshaw driving Jackson's dynamic vocals.

Five songs, recorded in April 2012, feature Jackson with the trio of Watson, bassist Dave Chamberlain and drummer Matt Skelton. Neil Sedaka and Howard Greenfield's "Love Will Keep Us Together"—a hit for Captain and Tennille, which appears here thanks to Jackson's love of "cheesy disco"—gets a funky re-working courtesy of Watson's arrangement and Jackson's heartfelt vocal. The result has a seductive appeal that has eluded previous versions. Paul Simon's "Still Crazy After All These Years," another Schofield arrangement, works beautifully: Jackson gets the mix of fondness and regret spot on.

Charlie Chaplin's "Smile," a duet between Jackson and Watson (who excels throughout), was recorded informally during a session break in January 2009. This was the song that inspired Jackson to put the album together. It's easy to understand the singer's enthusiasm: the performance is delightful. The inspiration for Watch What Happens is a fitting album closer, an emotionally compelling song that highlights Jackson's vocal talent.

Change Partners; Wouldn't It Be Loverly; I Only Have Eyes For You; More; The Nearness Of You; I Won't Dance; Lucky So And So; Still Crazy After All These Years; Watch What Happens; I Get Along Without You Very Well; Love Will Keep Us Together; Lover; Smile.