Wessell Anderson: Warm It Up, Warmdaddy! 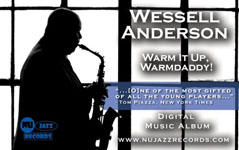 Alto saxophonist Wessell Anderson is a traditionalist who clearly enjoys upending tradition. On Warm It Up, Warmdaddy! several of the songs rework the harmonic structures of some cherished standards and their titles are the work of someone who embraces the classics without taking them too seriously.

The mischief begins with "What Is Dat Thang?," a riff on "What Is This Thing Called Love." Anderson lays down high-energy, upper register lines over a dynamite vamp by the rhythm section. Lawrence Sieberth plays a lyrical piano, Mark Gully adds vibrant drum accents, while Roland Guerin's bass underpins everything. Anderson's tone and execution on "I'll Forget May" is pure Charlie Parker, extended quotations and all. The title track has markers of Bud Powell's "Hallucinations" in its DNA. The somewhat repetitive "Balto, Will You Please Come Home" is saved from a dead end by Sieberth's exceptional playing. Anderson can't seem to find enough notes in his horn on "Monk By Starlight" to satisfy him and he blows furiously down to the bottom of the bell to find them. And his equally cyclonic playing highlights "Space 'Nakamura San,'" which suggests the theme from Star Trek and thus riffs on the very concept of what defines 'classic.' The bonus tracks included here are mostly variations on the variations, such as alternate takes of "Balto" and "I'll Forget May" played at faster tempos. And while "Bluesette" and "Strickly Platonic" show potential, they sound like experiments more than fully realized songs.

Anderson doesn't try to uphold or repudiate jazz tradition as much as meet it in the middle. Warm It Up, Warmdaddy!, while not perfect, is an excellent sax man playfully and cleverly redefining the Great American Songbook in his own image.