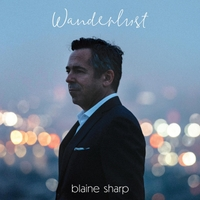 Blaine Sharp is a gifted vocalist with a passion for timeless jazz tones. His album Wanderlust is loaded with beautifully melodic songs, including renditions of beloved classics such as "On A Slow Boat To China" and "You Belong To Me." The latter, in particular, has a really atmospheric tempo, with a minimalist drum arrangement and some beautiful guitar parts, giving the song a pleasant retro flavor. In addition to that, "A Journey to a Star" is yet another transcendent gem on this album. The piano is very elegant, and it feels like it is having a conversation with Sharp's vocals. This is the track which truly reveals the artist's wide range in full, capturing the emotional power of his singing. The brushes on the snare give it a beautiful and moody texture, enhancing the sound and atmosphere. The song has a dynamic shift at some point in the arrangement, going from a smooth, mellow ballad, to a very colorful jazz number with plenty of brio.

"Lullaby of Birdland" is also another amazing track with a somewhat Latin flavor in the beat. This is a tasteful and shimmering song, highlighting Sharp's impressive versatility and control over his vocal range. These songs have timeless arrangements and exquisite production, but what really stands out is Sharp's warm vocals. The title track has a smooth, silky vibe, with some soothing bar chimes in the intro, adding texture to the entire release. Sharp's vocals cut through the mix seamlessly, while still retaining much heat and authenticity.

His voice is deep and direct, He is a charismatic singer who knows what it takes to charm the audience and get them to experience something heartfelt and real, track after track. Wanderlust is timeless, but also incredibly fresh, giving a unique spin to some of the most beloved songs in the genre. The record is fixated on love and the quest for romance, wherever that path may lead, past geographical and stylistic boundaries.

Wanderlust; Lullaby of Birdland; Le vent d'été; You Belong to Me; On a Slow Boat to China; A Journey to a Star; Road to Nowhere