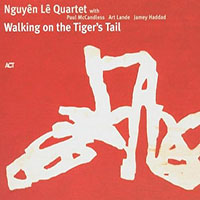 For his ninth record, French-Vietnamese guitarist Nguyên Lê renews musical relationships with two artists who appeared on his first two releases—woodwind multi-instrumentalist Paul McCandless from Lê's '96 debut, Zanzibar, and pianist Art Lande, who played on the '97 record Miracles. That Lande and McCandless also share a musical friendship that dates back over thirty years makes their teaming on Walking on the Tiger's Tail that much more significant.

Over the course of his career, Lê has demonstrated remarkable breadth. From the more culturally traditional Tales from Vietnam and the broader ethnic leanings of Bakida to the rock-inflections of Purple: Celebrating Jimi Hendrix, Lê has demonstrated an ability to place himself in a variety of stylistic spaces. And yet, with a tone and approach that leans towards fusion without ever indulging in the overbearances that so often characterize the genre, he remains distinctive. Whether involved in freewheeling improvisation or more straightforward funk, Lê's style incorporates an unusual way of twisting the end of a phrase, just the slightest hint of microtonality that leans ever so slightly away from his generally more Occidental approach.

It may be the shared musical language of Lande and McCandless, or maybe it's just that their musical personalities are so strong, but much of Walking on the Tiger's Tail has an ambience that supposes how McCandless' longstanding collaborative group Oregon might sound if it were a little more fusion-leaning. Like Oregon, there's a certain pastoral calm on pieces like "Snow on a Flower and "Butterfly Dream, with Lê playing acoustic guitar on the former and a cleaner-toned electric on the latter. But on the more playful "Wingless Flight and "Totsu! Lê indulges in an overdriven and funky tone—and some distinctly rock-inflected lines—that seems to mesh strangely and yet wholly naturally with the more organic textures around him.

Jamey Haddad divides his time between a traditional drum kit and a variety of ethnic percussion instruments, completing the link to Oregon and bringing to mind its mid to late-'80s period, when Trilok Gurtu had replaced the sadly-departed Collin Walcott.

That Lê should choose to form an ensemble without a bassist is not particularly unique. What is unusual is how rhythmically propulsive the whole affair is. Every member of the band takes a turn at carrying the bottom end—whether it's Lê's electronically pitch-shifted guitar, Lande's strong left hand, McCandless' bass clarinet, or Haddad's percussion. This isn't a case of creating a more atmospheric ambience, a la Paul Motian's trio; this is more about not missing the instrument because its role is always being emulated in some way, shape, or form.

Walking on the Tiger's Tail contains some of Lê's most focused writing to date, and it gives the clear sense that he wrote the album with these specific players in mind. Representing a broader world view like Oregon's but with a harder edge at times, Lê has crafted one of his most engagingly melodic and ultimately satisfying records to date.

Note: Walking on the Tiger's Tail is distributed in the US by HighNote.

Visit Nguyên Lê on the web.