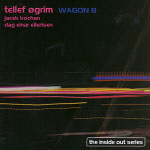 While it's easy to find artists who focus on fretless electric bass, those who concentrate on fretless electric guitar are less commonplace. High profile artists including jazz icon Pat Metheny and guitarist/vocalist Adrian Belew have dabbled with fretless guitars over the years, but few make it a priority. Norwegian guitarist Tellef Øgrim has been focusing on the instrument for twenty years, and while he's been involved in a variety of musical projects over the years, Wagon 8 is his first full-length CD as a leader.

It's an album that, with its combination of improvisation, written sketches and electronic processing, fits into the Nu Jazz sphere, but demonstrates just how broad that sphere is. Largely a trio disc featuring Øgrim, drummer/live electronics player Jacek Kochan and trombonist Dag Einar Ellertsen, it goes to show how an unconventional grouping can create music that can range from sharp and edgy to soft and gentle. It moves from amorphous freedom to pulse-driven intention with uncanny intuition.

Wagon 8 also possesses no shortage of wry humor, with titles like "There Are Insects With No Education and "Into This Distance (Did She Knit That Hat?). While the material is largely improvised or composed by the band members, a brief take on Duke Ellington's "Azure is at once conventional and curious. Ellertsen plays it straight, with Øgrim assuming the bass role and Kochan maintaining the pulse but injecting subtle absurdity throughout.

The elasticity of fretless guitar makes it a perfect partner with the equally flexible trombone. The title track is a mixture of electronic artifice and cued themes doubled by Øgrim and Ellertsen, but remains a generally free piece which ultimately settles into a tandem improvisation for guitar and trombone over ambient washes of sound. "Tidal Dance is a haunting feature for Øgrim, making full use of his instrument's ability to slide into notes with an almost bluesy feel. Ellertsen layers a low, multiphonic foundation with Kochan developing a tumultuous underpinning, leading the trio into more esoteric free territory.

By contrast, "Do They Know? and Kokkel I Monke rely on more defined rhythms, the latter closing in on funk, while still leaving plenty of room for unfettered exploration. Wagon 8 is less about instrumental prowess and more about expanding on general roadmaps and, at times, pulling order from chaos. Its inherent challenge and experimental nature doesn't detract from a compulsive appeal. Blending improvisation with electronics-based music, Wagon 8 is a strong debut for Øgrim's less-than-conventional instrument and collective.

There Are Insects With No Education; Wagon 8; Tidal Dance; Things We Touched; Do They Know?; Til Seters; The Departure of Mr. D; Kokkel I Monke; Michael, Are You There?; U.S.T.; Azure; Into This Distance (Did She Knit That Hat?).