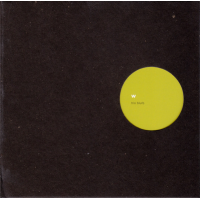 Trio Blurb—the combination of Maggie Nichols' voice, Mia Zabelka's violin and voice, and John Russell's guitar—first came together in 2010 at the Alpenglow II—Styria meets UK festival in London. In June 2011 they played together at The Vortex, where the guitarist hosts his long-running monthly improv music club, Mopomoso. The results of that Vortex performance were released in 2013 by the Austrian Extraplatte label. Prior to that release the trio was unnamed but when Zabelka asked for some info for the CD, Russell sent her a pdf headed "trio blurb"; the label took that to be the group name and it stuck. The four tracks on that CD demonstrated the vital understanding and empathy between the three, their individual contributions weaving together into a unified whole.

Although they have continued to gig together as often as their home-bases allow—Nichols is in London/Wales, Zabelka in Austria, Russell in London—W is only their second album, the follow-up to Trio Blurb. The music here consists of two extended tracks, totalling forty-seven minutes, recorded in September 2017 at the all-day Discovery festival organised by Russell in Walthamstow where he lives, and in March 2018 at the Horse improv music club at Iklectik in south London. Crucial to the success of the trio's music is that they are three distinct personalities who all manage to improvise simultaneously without getting in each other's way or upstaging each other.

Given conventional views of vocalists in groups, it would have been very easy for Nichols to become the sole focus, accompanied by violin and guitar; but that never happens, and the three all listen to and make space for each other so that no-one steals the limelight. Of course, Nichols has language at her disposal to grab an audience's attention, whether speaking in tongues, scatting or soaring romantically, but (as the clip below shows) Zabelka and Russell are experienced and versatile enough to have wiles of their own. The end-product is music that is equipped to grab and hold the listener's attention no matter how many times it has been heard. We must hope that the wait for their third album is not another five years.