By JOHN EYLES
February 9, 2020
Sign in to view read count 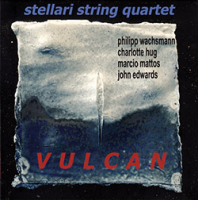 Despite the years that have elapsed since Stellari String Quartet's first album, Gocce Stellari (Emanem, 2009), right from the opening notes of this follow-up, Vulcan, there is not a shadow of a doubt that it is by the same group, with the same members and ethos. The combination of Philipp Wachsmann's violin, Charlotte Hug's viola, Marcio Mattos' cello and John Edwards' double bass is uniquely different to any other string quartet, as is its use of free improvisation. As Emanem proprietor Martin Davidson says in his sleeve note, "If there were stars in the world of free improvisation, then the members of this quartet would surely be among them—four very distinctive and fluent musicians, who also have the talent to work together to produce a fifth distinctive and fluent entity, namely an improvising string quartet. " In his own sleeve note, Wachsmann chooses to build bridges with conventional string quartets, not emphasize their differences to this quartet: "Vulcan, an acoustic quartet, using improvisation processes, is contributing to the treasure trove of 'String Quartet' compositions, repertoire, performances and quartets. The medium is particularly flexible, human and personal." Although they come from different places—the four were born in Brazil (Mattos), England (Edwards), Switzerland (Hug) and Uganda (Wachsmann)—and cultural backgrounds, their interactions do not particularly reflect these factors so much as the years that they have each spent on the improv scene and the quick-witted fluency they have developed as a result. The album's eleven tracks—ranging in length from just over two minutes to almost nine-and-a-half, a total of fifty-six minutes—were recorded by Wachsmann in 2016 at two London venues, St Mary's Church Stoke Newington and Iklectik Arts Lab. The overwhelming impression the music presents is of a group of four equals which is not led or dominated by any one of the four. Throughout, all four are playing for the vast majority of the time. The different pitches of the four instruments mean that any one of them can be picked out and heard clearly. However, rather than adopting that listening strategy, it is far more satisfying to listen to all four at once and appreciate the endless flow of ideas, stimuli and responses that passes between them. Anyone who enjoyed Gocce Stellari, and has been waiting a decade for its sequel, should be more than happy with Vulcan, while anyone who starts with this album is likely to chase up the older release. Compelling improv.