By JOHN BRICKER
November 23, 2019
Sign in to view read count 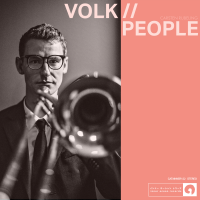 It is not often that production on an explicitly jazz release blends synths reminiscent of '90s video-game sound effects with drunken hip-hop rhythms. Despite a few rough spots, Carsten Rubeling's Volk//People deserves a healthy dose of praise for that.

The Canadian trombonist's debut album on lo-fi hip-hop and ambient-music label Inner Ocean Records strikes a relaxing balance between refreshing sounds and accessible songs, although some moments come off as more dull than mellow. In the past, Rubeling has made music in a diverse range of styles including jazz, classical, hip-hop and salsa in collaboration with all kinds of musicians, from the Calgary Philharmonic Orchestra to "Weird Al" Yankovic. Now, his varying interests and influences all make Volk//People a mostly lovely and unpredictable display of sound design and production.

Unfortunately, Rubeling does not kick off the album with one of its strongest tracks. On opener "Eubanks, " a stiff lead melody clashes with the track's tight mix of lounge keys, funk bass and propulsive drums. Carefree and expressive solos on trombone, trumpet and keys complement the song's groove much better than the hook, but fail to make it anything more than an average jazz jam.

Thankfully, the rest of the tracks capture the album's soothing mood much more effectively, elevating simple songs with catchy melodies and unique soundscapes. "Seattle 2001." begins with wavy synths and programmed boom-bap drums coated in a heavy layer of vinyl crackle that instantly set the chill atmosphere the first track failed to realize. The track transforms at its midpoint, opening up into a clean, spacious mix of bright piano, gorgeous trumpet leads and icy synth tones.

Volk//People leans even more heavily into its lo-fi hip-hop influence on "Boreal," where synth chords that sound ripped straight from an '90s video game complement muffled trumpet and piano melodies. The track's nostalgic production, showcasing a fantastic trumpet solo from Andre Wickenheiser, makes listening to the track feel like opening a bottle of wine after saving it for years.

The album's closing song, "Higher Learning," does not disappoint, building from a slow beat and soft pianos to a cathartic finale with thick layers of bright pianos and horns. Rubeling seamlessly guides the track through each dynamic shift, delivering his most expressive and lively soloing on the entire project.

Volk//People is not ambitious in its compositions or raw musicianship, but if you are looking for an unconventional and meditative jazz album to help you unwind, Carsten Rubeling has your back.