By Troy Collins
December 18, 2009
Sign in to view read count 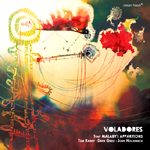 One of the most significant tenor saxophonists working today, Malaby's singular technique makes him one of the foremost improvisers of his generation. Where many of his peers mistake histrionics for intensity, Malaby values subtleties in volume, timbre and tone above dexterity and speed. Though his melodious phrasing often careens at a quicksilver pace, his nuanced attention to detail sets him apart from the masses of post-Coltrane acolytes. His supple, breathy embouchure lends "Lilas" a sublime air of introspection, while the roiling turbulence of his taut intervallic cadences amplifies the jagged contours of "Old Smokey."