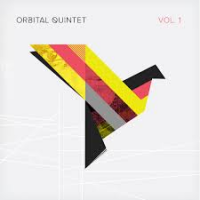 On its debut album, the Northern California-based Orbital Quintet offers eight intriguing tracks that avoid the clichés of standard blowing sessions, embracing instead the more subtle pleasures of mood and texture. With four compositions by guitarist David Wright, one each by bassist Benjamin Lee and trumpeter John Harrington, and a couple of freely improvised pieces, there's a range of stylistic approaches on display here.

Lee's "Home Away" and Wright's "Lower Orbit" are the most straightforwardly "jazzy" cuts on the record, with driving up-tempo swing on each. The former includes some feisty mutual improvisation from Harrington and altoist Andy Ehling, while the latter has Wright in John Scofield mode with a crunchy guitar sound for his comping and soloing. Then we have the moody, atmospheric "Arcophile" and "Scared of the Dark," both of which are considerably more oblique. Wright's heavily-processed guitar parts and Lee's arco bass lines help to create the mysterious sound environments on these cuts. They invite the listener into their explorations gradually, insinuating themselves rather than announcing their presence through overt melody or theme. Only at the tail end of "Arcophile" do Kyle Mueller's drums enter with a steady beat, allowing Wright to stretch out with a sinuous, effects-laden solo to finish the track. On "Scared of the Dark," Mueller is more content to keep things at a low simmer, using brushes for the last half of the track to sustain the subtle pulse underneath Ehling and Harrington's plaintive harmonies. Another Wright composition, "Blow by Blow," continues in this more abstract vein, this time with Wright's fuzzed-out guitar as a foundation for generating some low-key psychedelia channeling the more atmospheric aspects of Miles Davis's Live-Evil period.

For the other tracks, the group switches gears again, with stronger melodic components and post-bop rhythmic structures. "Aftermath" has a Wayne Shorter feel to it, especially those pieces he wrote during his late-60s tenure with Miles (a la Nefertiti). "Seven Bridges" is, fittingly enough, in 7/4, with a two-horn harmony in the melody and a loose bass ostinato from Lee making room for probing solos from Harrington and Ehling. Finally, the record ends with "Spontaneous Combustion," a lovely little tune with folkish elements that calls to mind some of the entries in the Bill Frisell songbook.

The Orbital Quintet brings commendable ambition and creativity to its work, and although it might have benefited by having a more cohesive overall concept, Vol. 1 is a promising effort from musicians who should have more to say in the future, especially once they develop their group sound a bit more—perhaps on Vol. 2.