By EYAL HAREUVENI
October 23, 2013
Sign in to view read count 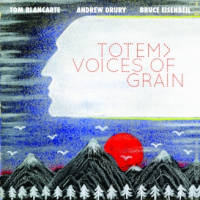 It took five years for the New York-based trio TOTEM> to release its sophomore album (after Solar Forge ESP, 2008) but the waiting paid off. This leaderless trio—comprised of guitarist Bruce Eisenbeil, double bassist Tom Blancarte and drummer Andrew Drury—is more than the sum of its parts and stronger than ever.

The trio alternates between experimental sonic exploration, and intense fiery free improvisations. On one hand, the sounds themselves, raw and brutal as they come, and the constant urge to explore its colors and auras fascinates the trio; on the other hand there is a compromised attempt to tie these sounds in loose contours. The trio developed its tight interplay over the course of countless rehearsals, gigs and immediate communication. Ideas are exchanged, developed, and blossom in an instant before the trio begins to explore another wave of ideas.

The seven pieces are dense textures where each musician contributes all of their energy to the accumulative and solidifying effort, employing extended techniques, frenzied rhythms, a determined and focused force that pushes forward in all directions all the time. This restless trio does not allow for even a second of rest from its hyperactive and high-octane mode of operation, and demonstrated this triumphantly on the explosive "Post-Repeating."

The pieces that focus on pure sonic researches are simply masterful and manage to form cohesive textures out of abstract, open-ended articulations. On "Written in the Body" the intense and spare sonic exploration creates a mysterious soundscape where the sounds produced from the guitar, double bass, the drum skins, and cymbals are melted into one unity with a wide spectrum of variations from raw noise through industrial and metallic to micro-tonal effects-laden sounds. "Towards Jouissance" is en electrified distorted texture that reaches to extraterrestrial sonic regions, while "Message Without a Code" structures a disturbing, metallic ambiance and the last piece "Silence On Its Road" surprises in its gentle, comforting sounds.

Genosong; Written in the Body; Counter Memory; Towards Jouissance; Message Without a Code; Post-Repeating; Silence On Its Road.