By GLENN ASTARITA
June 1, 2001
Sign in to view read count 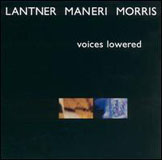 No one gloms the spotlight on Voices Lowered, as the musicians' draw upon a spontaneous group related effort consisting of three-way conversations, micro-themes and abstract lyricism. With works such as "Dirty Daisies , the band conveys a circular flow, accentuated by Joe Maneri's brawny tenor sax lines in conjunction with Joe Morris' intricately executed single note passages and Steven Lantner's sweeping chord progressions and rhythmic underpinnings. The trio also pursues succinctly developed statements amid a perceivable domino-type effect, as they trade notions and regenerate motifs along with subtle dynamics and variable patterns. Basically, this improvising troupe conjures up meticulously crafted or perhaps spellbinding interludes, enhanced by the musicians' distinctive and altogether stylistic approaches to their crafts. - Lantner's solo piano performance on "...On the Way , is all about minimalist themes, animated movements and fragmented choruses, as he also utilizes two pianos tuned a quarter tone apart. Simply put, Voices Lowered represents another strong, noteworthy entry into today's ever-evolving "new music" or jazz-based improvisational scene. Hence, three pioneers at the top of their game!

Dirty Daisies, Calling, Dig In, What You're Saying, To Start..., ...On the Way, Hangin' in the Garden