By Budd Kopman
September 28, 2014
Sign in to view read count 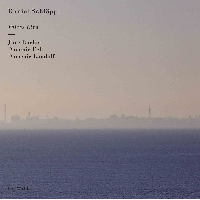 For what more could one ask?

A live gig, excellently recorded; an appreciative audience; a band which is sharp as a tack that comes charging out of the gate smoking, playing music to which one cannot help but move.

The previous live album of bassist Daniel Schlaeppi, was Dimensions Live, and he brings us this time a set from Jazzfestival Schaffhausen with a band that has no harmony instrument. Consisting of two saxophones/bass clarinets, Jurg Bucher (who appeared on Dimensions) and Domenic Landolf, who are backed, supported and pushed by the superb drummer Dominic Egli and of course Schlaeppi, the sound produced is wide open and yet precise and taut.

Bucher (left channel) and Landolf (right channel) sound like fraternal twins in that their unison playing is clean, with slight phrasing differences that feel very natural, but also that their solo improvisations, although different, seem to come from the same source and many times play off each other. Schlaeppi's sound is huge, centered and propulsive and it is balanced by the precise, yet highly energetic drumming of Egli.

The one hour set consists of eleven Schlaeppi compositions of which three are short bass solos that function as aural "palate" cleansers, allowing the audience to reset their bearings after the previous journey. The music is quite intense, but has much hip irony in that its antecedents are clearly in be-and hard-bop (down to the unison thematic intros), but overlayed and stretched by modern harmony and phrasing (both melodic and rhythmic). The music is easily appreciated on many levels, while remaining challenging and unpredictable.

"Graupenschauer," which opens the set, is typical of the proceedings. It starts with a deep, funky off-center bass ostinato (maintained throughout the piece) that is lit up by the entrance of Egli, making it real body music. The theme, played in unison by the horns, sounds like a very slowed down bop theme, and actually initially feels misplaced when heard in front of the funky bass riff. Landolf starts the soloing playing anywhere but on the beat, with perfectly placed accent commentary by Egli. The tension builds until the soloing is actually handed off to Bucher by overlapping notes with Egli becoming more and more active. The unison theme returns and serves as a nice way to resolve the tension that has been built up.

"Voices," the longest track, beginnings with a repeated bass pedal point note and swings like crazy when Egli comes in. Intro phrases are traded by the horns as the tension again builds, the theme is again played in unison, followed by repetition in harmony, then more overlapping phrases leading to the solos which float over the steady bass pulse and an always very busy, but steady Egli. A rhythmically free and softer section follows with a Landolf solo that gradually merges with the drums and bass back into rhythm. This dissolves to a free bass and drums duet, which leads back to the pulsing theme—just wonderful.

The rest of the tracks are just as good. "Far Out Blues" is just that, and is almost sinister (in a good way), "Call Me Bop" is a lot of plain fun to hear as this band's twist on the bop idiom. "Play of Colours" slows things down with a beautiful, folk-like tune played by two clarinets, and is followed by "Trial And Error" which ends up being a real blowing tune on quite disguised "I've Got Rhythm" changes. "Catwalk" closes this terrific set with a completely different gently lilting but somewhat funky feel that is a perfect way to end.

What a band -Schlaeppi solidly supports the three other players—and yes, Egli is as much a part of the "front line" as the awesome duo of Bucher and Landolf.