By EYAL HAREUVENI
August 15, 2015
Sign in to view read count 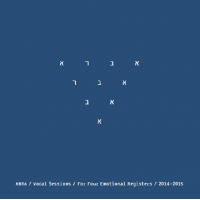 Abra is an Israeli improvising vocal ensemble featuring four musicians—Noa Haran, Faye Shapiro, Chanan Ben Simon and Yifat Ziv, taking its name from the Aramaic incantation Abra Ka Dabra (I shall create what i speak). The ensemble debut album documents the ensemble exploratory vocal improvisations during its live performances and studio sessions in different spaces and halls during the years 2014 and 2015.

The ensemble focuses on exploration of its varied vocal techniques and vocal qualities but balances this approach with a strong, emphatic interplay and a clear sense of harmonious unity. Abra vocalists enjoy the game-like play with fragments of texts, sometimes a casual daily speech, deconstructing it and composing it anew until these fragments gel again as a nuanced, colorful textures, adopting now new sets of grammar and meanings. During this improvised process the ensemble moves freely between meditative, minimalist choral singing to a playful free improvisations and even alternative, secular adaption of a Jewish prayers structure.

There are pieces that stress the seminal influence of Meredith Monk vocal ensemble, others that suggest Abra fresh interpretation of William S. Burroughs assertion that "Language is a virus from outer space." But despite the deep proficiency of the ensemble musicians-composers with various vocal techniques, contemporary song cycles, popular songs and assorted ethnic vocal traditions, Abra, as an ensemble, seeks to transform the inspirations into its new, personal language. Abra offers an open, inclusive, patient approach, with a great sensitivity to any vocal expression and its possible articulations. An approach that takes the vocal as an exciting mean that can liberate us and expand our consciousness, adding new options to one of the most important tools of our daily life.