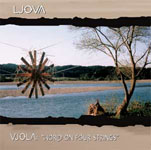 Unlike the piano or saxophone, there is little precedent for solo viola albums in jazz or creative music. For his ambitious debut, Lev "Ljova Zhurbin confronts that challenge with a compelling set of tunes reflecting a voracious range of stylistic influences, performed almost exclusively on viola. Lacking the tendency for shrillness of its smaller cousin, the violin, or the cello's propensity for melancholy, the viola offers a broad aural spectrum, which Zhurbin expertly weaves into rich soundscapes with multitracking and elegant solo statements.

"Central Park in the Dark stirs a plangent tone with the lone voice slowly unfurling its tale. Zhurbin, a veteran film scorer, effectively creates narratives with a shifting dynamic flow. A bright pizzicato lays the rhythmic foundation of "Bagel on the Malecon, supporting the long, yearning melodic line and a bouncy counterpart. The layers blend seamlessly, and despite the fact that they were played separately and overdubbed, there is a sense of interaction. Zhurbin attained this feel by recording the sections in close succession for an overall sound that is natural and not stilted by the multitracking.

"Coffee and Rum boasts a vaguely old-timey feel that sways with charming ease. Zhurbin demonstrates the viola's range with a bass line on "Crosstown that propels the sly blues. The ever-inspirational Björk's "Army of Me is radically deconstructed and reworked; Zhurbin teases the melody before abstrusely stating it amid swirling overtones. Michael Ward-Bergeman's accordion on "Garmoshka imbues a sense of Eastern European folk music, a flavor sprinkled throughout the Russia-born Zhurbin's album. Like many younger musicians, this leader has absorbed a panoply of music and gleefully undermines rigid notions of genre.